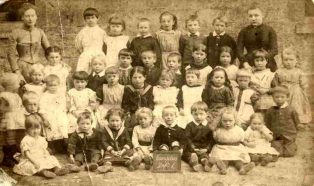 Infant School after alterations to the building 1913

Starting with the Infant School, we are compiling histories of the different primary schools in Campden, using the information in our Archives.

The old photographs are very helpful in identifying how the buildings and the people looked.  We have over 16,000 digital images of Campden life, taken from printed photos that have been loaned or donated. An increasing proportion now are original digital images, taken now, which will be valuable to future researchers.

Built as the girls ‘Blue’ School in 1820, only about ten years later it was changed to use as the Infants School, literally taking some very young children. Alterations to the building were made in 1913 and it continued until the new primary school was opened in 1970.
The attached document contains our information so far – more to come.