You are here: Home>History>Campden in Wartime>The German Field Gun Affair 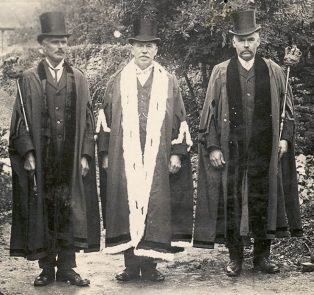 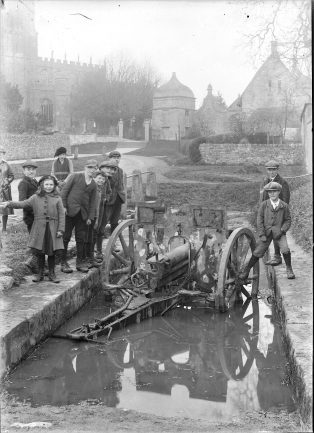 The German field gun in the cart wash 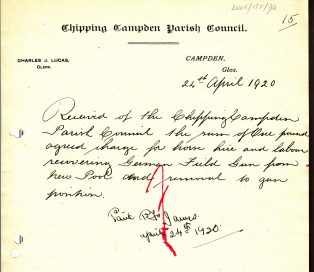 Invoice for refixing the field gun by the Market Hall

One hundred years ago, on 6th March 1920, a German field gun was installed with great ceremony on a concrete base to the side of Campden Market Hall.

But he also used the occasion to say that the gun ‘would to some stand as a mark to condemn them for the cowardly way in which they evaded their plain duty. Some suddenly found they had a conscience and refused to go, and so wriggled out of serving. That trophy would remind them that they failed to do their duty.’ Feelings ran high for some years in Campden about men who did not fight. There were strong opinions about the placing of the field gun for all to see, and what it signified.

Don Ellis was a lad at the time:

‘I’ll tell you about the German gun. It was put outside the market Hall on a concrete platform and people did not want that thing that had killed some of our blokes so one Saturday night they decided that they were going to move it and they moved it and dumped it back in there (the cart wash). The council or someone put it back again and they cemented the wheels in but before the cement was set, a child was sent to scratch it all out.  So on the Saturday night several of them got together – my elder brother Ruffy who went out to Canada, he was among them – I wasn’t allowed in with that lot – and Sergeant Lane came out of the police station – hello, what’s up then – Sergeant you’d better go back and know nothing. He went back and he knew nothing. Anyway they went under sealed orders [!] up the street, orders to be opened at the church. The gun was to be taken to the Coneygree and run down into the brook. They took it to the gate of the Coneygree, went up to the top of the bank, pulled the lynch pins out of the wheels and ran it down. It ran down and as it fell into the brook so its wheels dropped.

We loved the gun, we used to play on it. Imagine we were soldiers, I mean. Anyway that was taken down into the brook. First of all it went into the New Pool opposite the almshouses, then it was replaced by the Market Hall again and they took it off again and eventually it was taken to Burnt Norton, Lord Harrowby’s. It isn’t there now, I don’t know what happened to it.

The gun stayed in the brook for about a year and the affair came to its close when Lord Sandon, with the blessing of the parish council, had the gun removed at his own expense to his estate and also donated two guineas to the Campden War Memorial Fund. In 1940 he suggested that it could sent to the war effort, as scrap, and this was agreed by Campden parish council.

See the attached account from ‘Mumming in a North Cotswold town’ by Dr. Craig Fees.