You are here: Home>History>Films, Radio and Television>"Upper Slocombe" - The Archers' connection with Campden

We have been given a souvenir booklet about people in ‘The Archers’. You might wonder about its relevance to Campden history, but it all started here!

Charles Gardiner (1902-1966) was Clerk to Evesham Rural District Council for 37 years with a variety of responsibilities, particularly during WWII.  He was also a keen observer of country life and a prolific writer about customs, dialect, work and leisure in the Vale and Cotswolds.

He wrote books and humorously descriptive magazine articles on a range of local topics, and in 1936 submitted a radio play to the BBC. It was called ‘Motor Cars or Hosses’ and was the first of a series of comedy plays on ‘the deplorable episodes in the history of the Parish Council of the Cotswold village of Upper Slocombe’.  But there was a snag. Many of the parts were in Cotswold dialect which was not familiar to BBC actors and so local people were enrolled to play the parts.  They continued to act in the following twelve half-hour episodes and also in other productions. 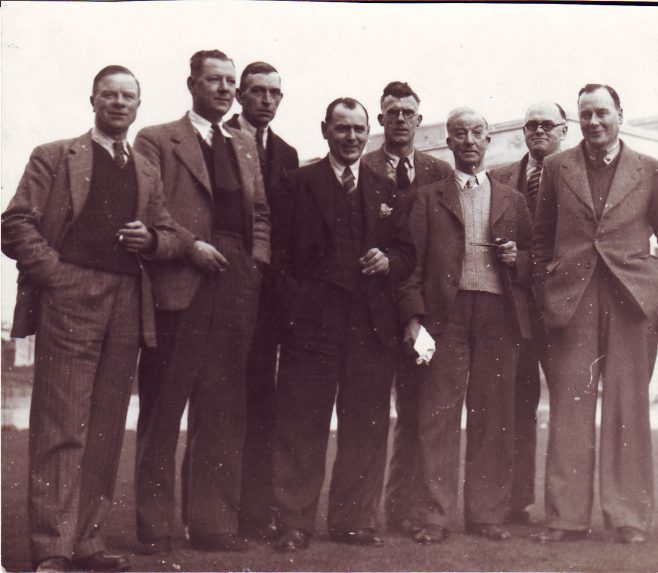 “Being a Truthful Account of one of the more Deplorable Episodes in the History of the Parish Council of the Cotswold Village of Upper Slocombe.  Compiled from the Official Records by C. H. GARDINER” 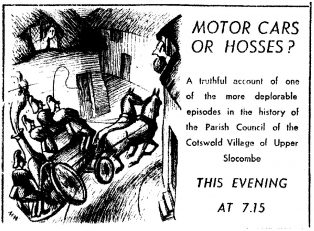 Scene: The Village Hall and possibly other and more exciting places
Characters:  The Chairman, The Squire, The Rector, Mrs. Witherspoon, Messrs. John Smith, Maggs, Moore, Juggins, and Robbins, and other inhabitants of the village.
Producer: Owen Reed.
Synopsis:  The Squire, living as he does in a fine manor house with irreplaceable antiques and old masters, looks askance on the Parish Council’s horse-drawn fire equipment. Possibly he had heard of both engine and firemen being ready and the horses out somewhere drawing the local ‘fly’. However that may be, he offers to pay half the cost of a motor fire engine. The opposition shown by a powerful element of the Council who fear the other half of the cost will fall on to the rates, leads to a battle and an ingenious denouement.

“Being a truthful account of the Coronation celebrations in the Cotswold village of Upper Slocombe.  Compiled from the official records by Charles Gardiner.” 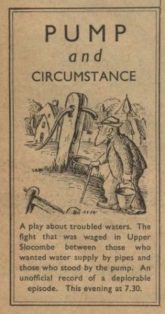 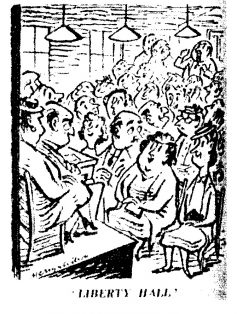 ‘Liberty Hall’ was one of the later half-hour plays, from 1948, and two years later the first episode of ‘The Archers’ was broadcast, with a number of the ‘Upper Slocombe’ actors moving into key roles, including  Bob Arnold, Bill Payne and George Hart. 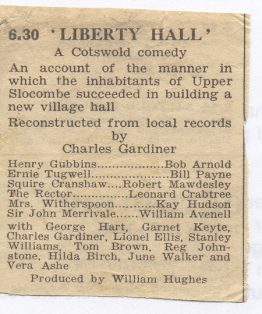 ‘The Archers’, was said to be inspired by the Upper Slocombe series. Bob Arnold became Tom Forrest, Bill Payne turned into Ned Larkin and George Hart was Jethro Larkin until he was ‘killed off’ in 1987. Bill lived at Ebrington and George ran an agricultural engineering business in Campden.

Radio Times information accessed from the BBC Genome Project   on 31.12.20