You are here: Home>Archives>From the Archives>The Holly and the Ivy

The Holly and the Ivy 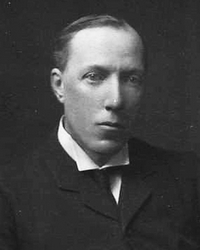 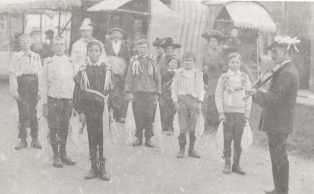 Campden boys' Morris, said to have been formed by Dennis Hathaway for Cecil Sharp's visit 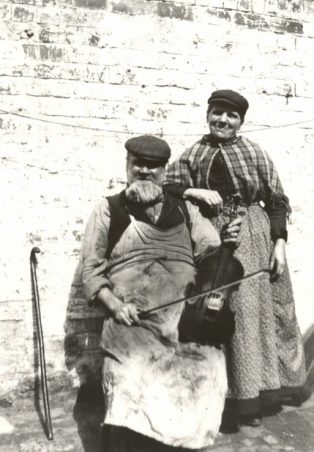 A query about Campden’s connection with the Christmas carol ‘The Holly and the Ivy‘ prompted us to look further into its history.

Over 100 years ago Cecil James Sharp (1859 – 1924), England’s most prolific folk music and dance collector of what is now widely known as the first folk revival, visited Campden to seek out local music and dance.

On January 13th 1909 he talked to Mrs Mary Clayton in Sheep Street. She sang him a carol she remembered from her childhood and the tune was The Holly and Ivy tune we recognize today, but the words were not quite those we know today.

The holly and the berry
As red as any blood
And merry rose sweet Jesus Christ
For to do poor sinners good.

The holly hath a prickle
As sharp as any thorn
And merry rose sweet Jesus Christ
On Christmas Day in the morn.

The holly and the ivy
When they are both full grown,
But of all the trees that are in the wood
The holly bears the crown.

Jill Wilson wrote:  “I have not found any explanation of the reason for the difference but the following is my own suggestion. Now Mary Clayton had heard the carol as a child or young woman. It is said that she was a cousin of Canon Kennaway, vicar here for 40 years until 1872, and was a frequent visitor at the vicarage. She was born about 1845 and I rather imagine that a Victorian child could well have misheard or misunderstood the words “Mary bore sweet Jesus Christ” as “Merry rose sweet Jesus Christ.” In those days of bowdlerization it may even be that the words were edited for the ears of a well brought up young lady. Fortunately Cecil Sharp found other memories of the carol. In 1912 in Cornwall two people sang him other versions.   Mrs Hezeltine of Camborne supplied the refrain:

The rising of the sun
And the running of the deer,
Is playing of the merry we done,
Sweet singing of the choir.

“The third line is a bit peculiar and she seems to have misheard too. Of course these carols had not been written down for years and perhaps never had been; they had been kept alive by people hearing them and remembering them so we shouldn’t be too surprised to get some variations. Two old chaps in the Ross workhouse gave Cecil Sharp yet further versions in 1921 and Mrs Wyatt of Somerset knew some more. By this time Cecil Sharp had found four different tunes and six versions of the words. One was more appropriate to Easter and another would have been sung by the Waits. Oliver Price in Ross workhouse had obviously done his share of this – going around singing at festival time to obtain gifts of food, drink and money. He ended with this verse:

God bless the ruler of this house
And send him long to reign,
That many a merry Christmas
He may live to see again.
God bless his friends and kindreds
That live both far and near
God bless them and send them all
A happy new year.

“Today we recognise those words as the last verse of ‘God rest you merry, Gentlemen’.  As for the earlier history of this carol – well, it shows every sign of being extremely old. In pagan times the Holly stood for the man and the Ivy for the woman and the two together made powerful fertility magic. The symbolism continued at least until Tudor times. Henry VIII wrote a song or carol Grene Groweth the Holly which the New Grove Dictionary of Music tactfully says “is centuries removed musically from the carol but preserves the spirit of courtly game: manHolly/womanlvy.”  The rewriting of an old popular song to give a Christian message could however be much earlier than the Reformation.

Would the carol have been forgotten if Cecil Sharp had not met Mary Clayton? We may never know if he’d have got together enough verses to reconstruct the words. We might have been singing this lovely carol to quite a different tune if he hadn’t come to Campden!”