In Memoriam - with style 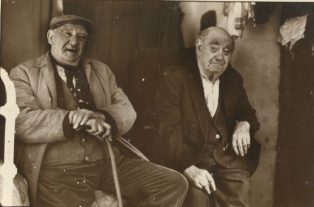 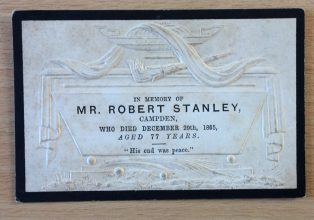 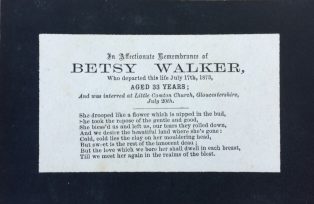 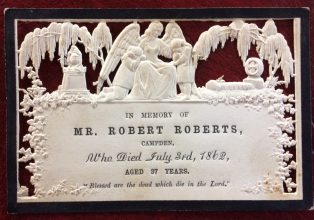 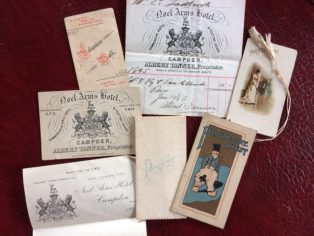 Ephemera from The Noel Arms Hotel

A collection of memorial cards from a hundred years ago has provided us with an insight into the importance given, at that time, to expressing formal public grief.

Most of the cards relate to Campden families and will add to our knowledge of their histories. Wilfred Nobes was killed in action in 1918 and his card combines with his story in Paul Hughes’ book ‘Campden  1914-18’.   One of the most decorated cards is for a three-year-old child, not from Campden but with a family connection.   The inscriptions and poems, such as that for Betsy Walker, also reflect the expressions of the time.

The collection of cards is part of a donation of documents and photographs from the late Edwin Ladbrook, whose father, Lawrence, was a notable ‘Campden Character’ with his brother Charlie. We have documents relating the the ‘Eight Bells’ when the landlord was James Gladwin, whose widow, Millicent, subsequently married Edwin’s grandfather, Edwin. Edwin and Millicent ran a butcher’s shop in Lower High Street and Millicent was renowned for her faggots In rich gravy. We have recorded a memory of someone, when a child walking past the open window (butchers did not have glazed windows then), saw the bowls of pork dripping with sprigs of rosemary.

Another bundle comprises cards and invoices relating to the Noel Arms, where dinners and refreshments were provided for Balls, including those in aid of the Volunteer Corps, and for whist drives and other entertainments.

Some letters tell a story of the Nobes brothers, Harry, Frank and Thomas, who all survived WWI. Their father, Thomas, sent a request in 1918 for Tom’s furlough to be extended so that he could help with the farm. A notification is included that shows that Tom was allocated to the Agricultural Labour Corps, but it is not clear whether he did end up helping at home.

The sorting and cataloguing of all this interesting material will continue, in the Archive Room ‘bubble’, and more stories may be uncovered.