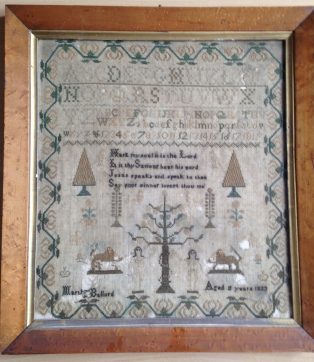 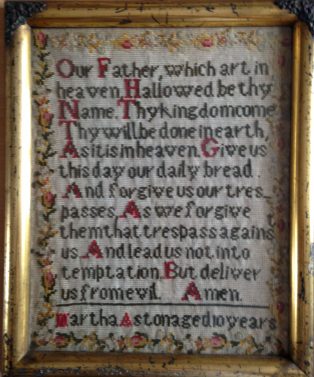 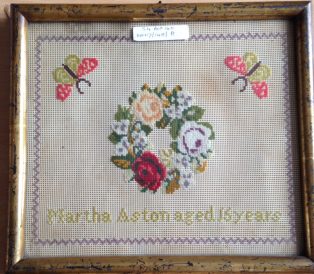 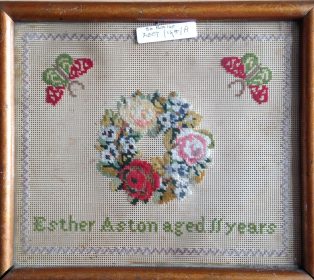 In the Archives we have four lovely samplers with a family connection, although the final link is not yet made.  The first sampler was sewn by Martha Ballard in 1833, when she was 11 years old. It was donated to us in 2005 by the grandson of Peninuah Aston. Peninuah was born and brought up in Campden with her sisters, Martha and Esther Aston.

Martha Aston created the ‘Lords Prayer’ sampler, a lot of work at only 10 years old. She must have found the second quite easy to do, in comparison. She and Esther made two samplers to the same pattern but in different colours, possibly they were done at school.

She left Campden as a young woman and married a farmer, a widower, who lived in Napton on the Hill, and it seems that the sampler was left with her sister Esther, who became Mrs Starkiss, of Park Road sweet shop fame. These three were donated to our Archives in 2007, having originally come from Esther’s daughter. So it seemed that it might not be too difficult to find Martha Ballard, who might have been an ancestor of the three Aston sisters, but so far we have had no luck.

Samplers can be a wonderful record of someone’s life, created with love and using motifs that represent important moments; or we can imagine little girls sitting in the schoolroom, pricking their fingers and wishing that they were outside playing!

The CCHS Embroidery Group was formed from the Campden House research team, to look at the various styles of sewing and embroidery in Tudor/Jacobean times. We meet in Campden Library on the 1st and 3rd Mondays of the month, at 2.15pm. We sew and exchange information about the many different styles of clothing in that period. Who knew that gloves were so important! Call in for a chat.

One of our members did extensive research into the Aston Family – see her report below – but still no connection with Martha Ballard!