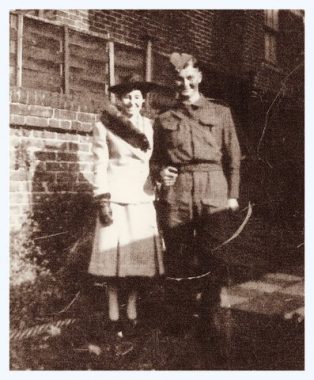 Then came the gathering storm clouds of war and the men began to be ‘called up’. First to go from Campden were the reservists, followed by many of the young men who were replaced by women in the Land Army. Then came the awful day I was called up too, April 1940, 2 days after my 21st, and I had to leave Father and Mother and farming for the next six years. Along with all the other farmers Father was instructed by the local War Ag agent William Stokes of Paxford on such things as which crops to grow, what acreage and where to obtain Italian POW’s to help with the work. Jim Cooling from Balsall Common came to help in my place, but he was a tailor by trade so had little or no experience of farming.

I was away in the army for six years, billeted in various parts of the UK, during which time I married my wife Edna Green of Portsmouth and later the first of our three daughters was born. When I was demobbed in May 1946 I returned to Chipping Campden and ‘took up where I had left off,’ working still in the partnership with my father. This continued until Father retired from farming, concentrating then on tomato growing in his big greenhouse. He lived until the year after he had celebrated his 80th birthday with all his family at our farmhouse on Marfurlong farm. A contended and peaceful man he passed away following a heart attack, but his influence in our lives continues down through the generations.