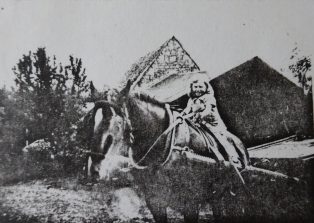 Prince with my sister, Dorothy 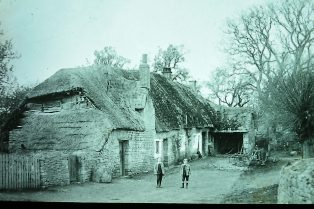 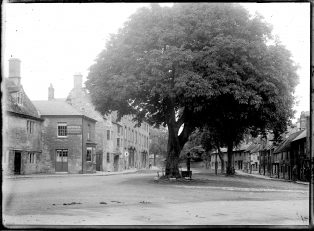 Father’s first horse was a ‘half leg’ called Prince. Jack Coldicott let Father graze him in the Leasows at no cost. That’s how it was in those days, folk helped each other out easily. Our second horse came when one day Father was working in our front garden and a man from Draycott came by with a pony and trap. Stopping by he told Father both the pony and trap were for sale, so Father bought both. The pony, who we named Tommy, was an ex-pit pony who had not been treated very well and was slightly lame though not suffering in any way. The trap had a high removable wooden seat so Sidney and I were able to graduate from a wheelbarrow to the pony and trap for selling Father’s vegetables around the town.

At one of the monthly Wednesday cattle markets he saw two small cart horses and carts for sale. The vendor had rented them out to the council to haul stone for repairing the roads as many of these were still local stone and not tarmac’d. One proved to be a good worker, the other was stubborn and lazy, so we sold him on at Stow Fair. This was an annual horse fair and I rode our horse the 10 miles bare-backed returning home rather sore!

There were three farrier/blacksmiths in Campden: Tom Hayden, behind what was Cutts’ garage and one at the top of Blind Lane opposite Haines’ yard

and next to the home of Mrs Wasley who incidentally helped my mother each week with the washing.  Father usually took our horses to be shod at Guthrie’s yard in Leasebourne where the work would be carried out by Tom Barnes who both worked and lived with the Guthries.  But in the icy winter weather Father would take the horse to Westington blacksmith where the shoe nails would be removed and replaced by ‘frostnails’ which had a protruding head to give the horses a grip on the ice.

Speaking of horses’ shoes reminds me of another of my father’s skills. Having five pairs of boy’s feet to keep well shod there were always shoes to be repaired. Buying a length of shoe leather, tacks and studs from Elsley’s the ironmongers, and using his ‘last’ he would cut and fit the leather to our worn shoe soles tacking it in place and edging it round with studs. We could make the sparks fly with the friction if we skidded along the pavement!