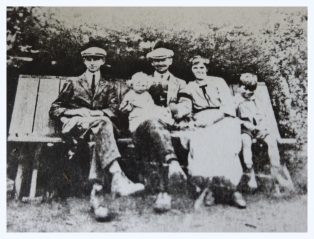 Harry and Evelyn with George, Yvonne and Don 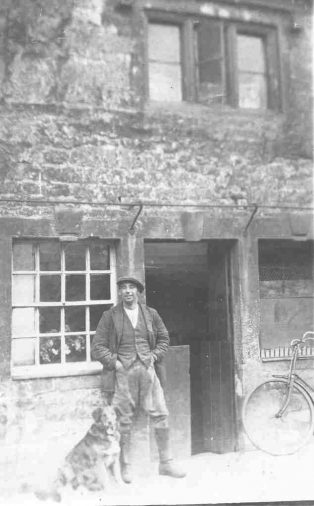 Bee keeping practices have not changed over the years and just as today when the bees swarmed in the trees Father would take a skep, hold it under the branch he was shaking violently causing the bees to fall off into the skep.  He would then place the skep upside down on the ground at an angle leaving it there to attract all the swarm.  Sometime later he would place a ramp covered with a sheet from the skep up to the hive then gently smoke the bees into it. Fascinating indeed!

Anyone travelling down Blind Lane could look across and see the row of hives. Across from these was a massive, ancient walnut tree, but it was not very productive.  It had a huge split down the trunk and water would collect there after heavy rain so Father decided to sell it for the wood. The buyers came and dug all around the roots and took the tree, roots and all, to use for making walnut veneer.  One day Mr Alec Miller at Tally-Ho told Father he would like to extend his garden which bordered the orchard, would he sell him a strip of land?  So together they came to an agreement on the price, the pound notes were handed over and the deal was done!  Just as simple as that! Nothing formal, no land registry to be informed or papers to alter in those days!

There were pigsties too

Father kept two or three sows at the top of the orchard. He fed these with corn he had had milled by Billy Keen at Westington flour mill just opposite the end of Watery lane.  Each year he would get Lawrence Ladbrook to kill one of the pigs to provide meat for our family.  The pig would be hung on a pole in an outbuilding to get cold then Lawrence would come back and joint it for us.  Out of the shed would come the big salting lead. (There were several of these in the town which we all shared with anyone needing to preserve their meat.)  Using salt bought from Mr Wooten the travelling salt-seller from Evesham, Father would spend ages repeatedly rubbing it into the meat. The front shoulders or hams took extra rubbing to be sure they would keep. Next they would be hung in muslin covers from the meat racks on our living room ceiling, the other joints being laid across these racks.

As needed Father would borrow a boar to serve the sows usually from Mr Haines so they could farrow twice a year and the piglets be sold later at the monthly pig and cattle market held behind the Noel Arms. It fell to me to help him castrate the male piglets, a very unpleasant job! Holding their head between my legs and spreading their legs Father, with sharpened knife, would do the ghastly deed. A real DIY job! The pigs had the run of the orchard along with the cockerel and hens that he kept.  Each evening Father would say: ‘Now Donny my boy, have you done the poultry houses tonight?’ This was my responsibility and I took it seriously as there was always the risk of a visit from the fox.  As well as selling the eggs we sold the baby chicks usually for 6d each and a hen would fetch 3s 6d.  I would take the hen in a sack and the chicks in a peck basket to Dudley Haydon who usually bought them all.