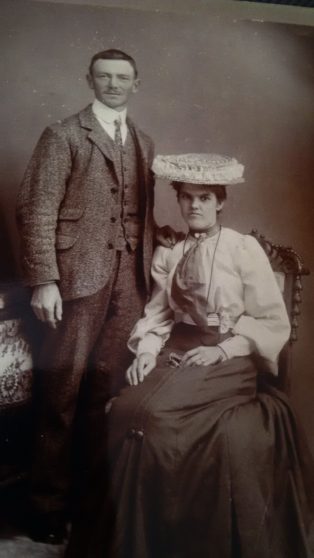 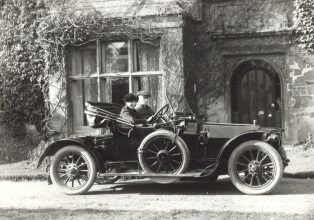 Col Lynch-Staunton and his car

My father was a first-class role model, hardworking, turning his hand to any job or small enterprise which would help to provide for his family

Father’s uncle, William Wheatcroft, also of Ebrington and with whom Father had lived for a time, was a skilled pruner, budder and grafter and taught my father these skills while he was growing up.  These were to be just the first of many other skills.

To begin with he was employed by Colonel Richard Lynch-Staunton at the Court House in Chipping Campden, as gardener, also buying the fruit crops on the apple and pear trees on the terraced land behind of the Court House. There were also walnut and cherry trees on this land, but these crops were usually bought by Edgar Hartwell of Weston sub Edge.

Father’s job also included the washing of the Colonel’s cars.  Mr Jones of Sheep Street and the Colonel were the first two people in Campden to own cars. I don’t know what make the Colonel’s car was, but Mr Jones’ car was a Ford.

When WW1 broke out Father was released by the Colonel to work as gatekeeper for Hotchkiss armoury in Coventry for the duration of the war. On leaving he was presented with a mantel clock, the front of which bore an inscription plate recognising his services to the Hotchkiss staff. He had to cycle the 30 miles each way every week end leaving my Mother with the weekly responsibility of four young boys.

After the war he focused on market gardening. Moving from Tally-Ho into Yverdon meant he then had half an acre of ground on which was an orchard of old apple and plum trees and a hedgerow of damson trees. On some of these he used his grafting skills so producing good quality, flavoursome fruit to sell.  His knowledge of rose budding would continue to be put to good use. When I was old enough to help him and he said ”now Donny my boy, bring a sack and the ‘graft’ (a long, narrow spade)” I knew what we were about to do.

Having obtained permission from Jack Coldicott, one of the local butchers, who owned the Leasows, Father would dig up the wild dog rose briars growing in the boundary hedgerows there and we’d replant them in trenches in the garden.  After two years these stocks would be strong enough to ‘bud’ from other cultivated roses such as the ‘Dorothy Perkins’ and so produce beautiful blooms.  I loved watching him as he deftly removed a sliver of stem along with the bud from one rose bush and then opening the receiving stem of the other would slip in the new bud carefully binding it round with raffia.  Next he would cover it with a poultice made of soil and cow dung to protect it. These bushes would eventually be replanted in one or other of the gardens that he tended for people in the town.