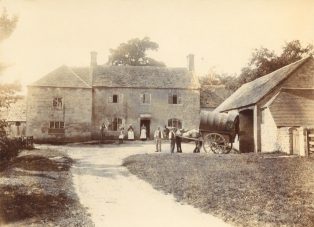 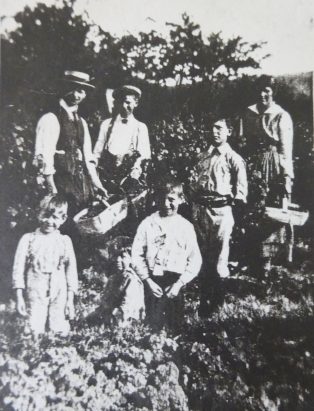 Father became well known for quality plants, selling them easily for 3d or 4d a score (20).  As time went on he was able to buy an extra strip of land beside our house on which he grew all kinds of vegetables to sell: lettuce, radish, cabbages, cauliflower, carrots and onions, having bought the seeds from Jack Horne’s shop opposite Cidermill Lane.  Anything left unsold at the end of a week was put in a hand cart and my brother Sidney and I would push it round the town. A peck basket full at a time we would go from door to door to sell them.

“If we managed to sell everything we would pay a visit to Mrs Callaway’s bakers shop on Sheep Street corner and buy ourselves one of her delicious lardy cakes. These she sold for ‘thru’pence ha’penny’ for four”

Father erected a small glass house across the drive from our house, which in the cold weather was heated by water pipes from a boiler outside, ideal for the trays of seeds germinating for his flower plants. When all these were either sold or planted out under the three rows of cold frames the glass house was then used for growing tomatoes. He sent us boys to the riding stables at Westington Mill (owned by Mr and Mrs Stafford) to collect horse manure which he used in the cold frames. The steam from this when the sun shone created a humid environment within the frames for the plants to flourish. It was also used as mulch for his row of rhubarb crowns through the winter after which Father would ‘force’ by placing tall clay pots around in the spring. The bundles of rhubarb sticks we sold from our barrow for 4d a bundle.

When I was a teenager Father progressed to buying fruit crops from other orchards in Campden and in Ebrington.  My brother George would go with him to assess the quantity and quality of the fruit which he then bid for at the auction held in the Lygon Arms. He, my brothers George and Sidney and I would go to the orchards with ladders and peck baskets attached to a leather belt around our shoulders to pick the fruit. I remember falling from a ladder with a full peck basket whilst picking fruit behind Mrs Hodgkis’ shop. Thankfully I was unhurt, but I don’t think the fruit benefitted much from the fall! Father would sort and pack all the fruit into chip baskets and load onto the cart that same evening and early next morning would hitch up Prince our horse and take them the 9 miles to Evesham market. I remember back then each year we would be troubled with large flocks of bullfinches and other birds descending on the fruit trees just as the blossom was budding. If they were allowed to destroy these then of course there would be no fruit. So Father would use his little single barrel 4.10 gun and shoot giving them a good scare.