Making the most of things 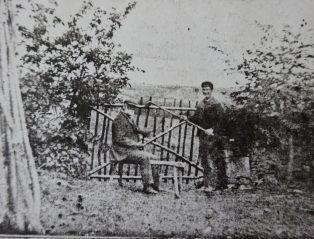 The sheds’ roofs were made of corrugated iron which rusted and needed regular repairing. So Father would go down to the gas works by the railway station and buy a five gallon drum of bitumen, a by-product from the process of extracting gas from burning coal. This he would heat over a little outdoor fire, spread it over the roofs, then sprinkle fine sand over to bond it and for added protection against the elements. It seemed to me he could turn his hand to just about anything.

For a short while Father also rented an acre of land behind Bill Blakeman’s home, Wood House, at the entrance of the drive to Campden House, part of which was planted with Pershore and Victoria plum trees. Further along the drive on either side were trees where the wood was sold in ‘drifts’. Father would purchase a ‘drift’ of wood in which were saplings and nut bushes. The saplings he would leave to grow, but the nut bushes he would coppice leaving ‘stools’ to regrow. Cut at just above ground level using axes or bill hooks the strongest wood we either cut into ‘y’ props to use for supporting trees when the boughs were heavy with fruit or sold as stakes for hedge-laying. The smaller wood was used for supporting plants such as dahlias. The taller, thinner wood was sold for  weaving ‘heatherings’ also for use in hedge-laying. My brother George was skilled at trimming the smaller bits with a bill hook, tying them with wire into ‘faggots’ or bundles. These we stored in the orchard ready to use as firewood the following winter.

The next big step of progress my Father made was to take on the renting of 15 acres at Russell’s in about 1925 which he subsequently bought.   Here he grew sprouts, peas and cabbage, propagating the plants in his glass house.  This land included ‘the little field’ – about 2 acres – where he kept two or three ‘Large Black’ sows whose litters often numbered 9-11 and grazed our pony Tommy who we used for row-cropping. He planted this with clover/grass known as ley purchased from Yates of Evesham. Conveniently there was a spring close by that fed the water trough there for the animals. Around this time he also rented ‘the Big Ground’, a small plot of about 3 ½ acres! It was accessed from a track opposite the gate into the cemetery.