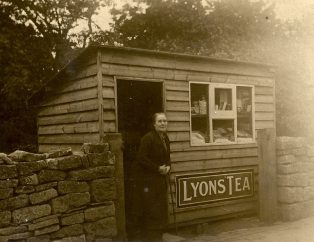 Mrs Esther Starkiss outside her sweet shop in Park Road 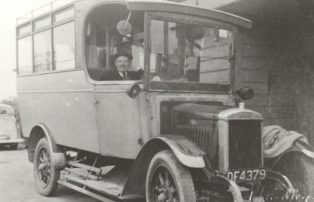 George Haysum, with his bus, nicknamed 'The Flying Greenhouse'

The monthly cattle markets and horse fairs were the days when Father gave me my fair day penny.

“I would spend one ha’penny on some liquorice from Mrs Starkis’ sweet shop then another day spend the other ha’penny probably on sweets again!”

One of my favourite purchases, when I could save up enough pennies, was a tin of condensed milk.  I pierced the top of the can each side put it up on the mantle shelf above the fireplace and just sipped it now and again.  It would last me ages, but then it had cost me quite a lot so it had to last!

The other treat we had was an annual holiday. This consisted of a day trip to the Malvern Hills!  With picnics packed we would ride the three miles to Campden railway station on George Haysum’s 12 seater Morris Commercial bus at a cost of thrupence each. George ran a regular service to and from the station. His cab had open sides and if there was luggage to take he would stack it up beside him. Our day’s holiday was really exciting, but Father lost no time next day in reminding us ”now then boys it’s back to work as usual, you’ve had your holiday”.

Another enjoyable opportunity was to swim in the bathing lake above Westington Mill, this is where I learnt to swim. We had to pay Bessie Keen from the mill ‘thrupence’ before we could walk through to the lake.

When motor vehicles became more common in Campden the local council approached Father to buy some of his land so that the corner of Dyer’s lane and Watery lane could be widened and made safer for the increasing amount of traffic. So once again without further ado, an agreement was reached, £30 changed hands and the work was done!