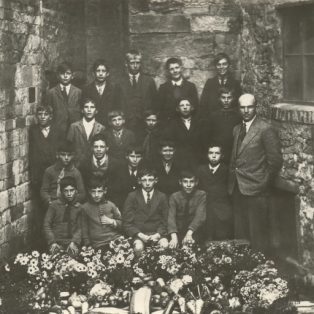 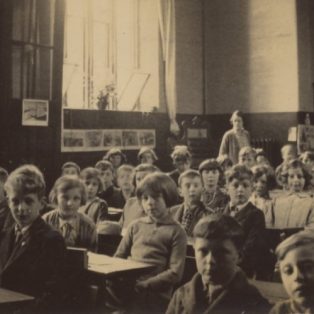 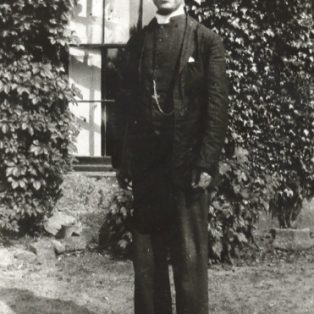 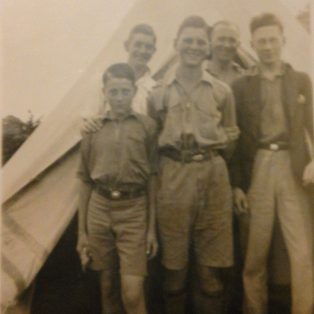 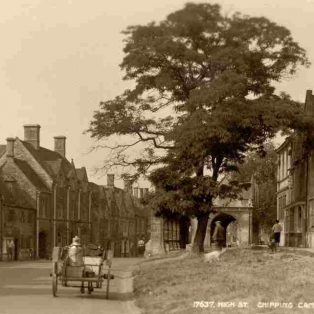 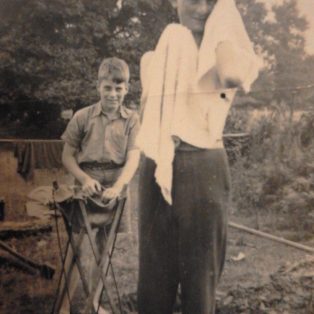 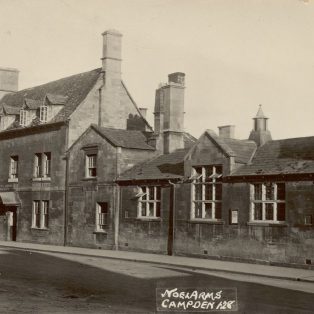 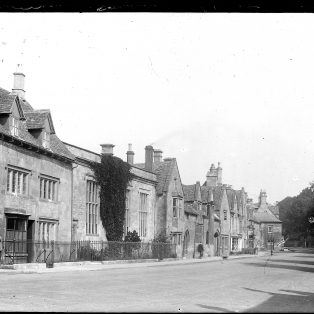 Starting school at 4 years old, one of my earliest memories of infant school is of our teacher Miss Warner. A kindly lady, she was lame and walked with the help of a stick. If we behaved well she would occasionally bring out a toy with dancing men on which she would wind up to set them dancing and keep us all transfixed! Miss Baum was the other teacher and she taught the juniors, there being only the two classes.

The school was where the Library is now and my best friend Don Pitcher (also known as Froggy!) and I would walk to school together from Park Road often playing marbles in the gutter as we went. It was quite safe as long as we kept out of the way of any passing horse and cart. We called our biggest marble ‘the talley’ and it was a great loss if it accidentally rolled into the drain! As we walked home from school we would sometimes turn into an alleyway leading from the main street to two cottages. Over the fence along this path we would look down into the back yard of  Ladbrook’s the butchers (still called Butcher’s House) and watch what was happening with the animals held there ready for slaughter. As an aside, Mrs Ladbrook made delicious faggots (with meat from other butchers!) which were for sale every Friday for 4d each. Each Christmas a party was organised for us in the town hall and we would return home happily each with our gift of an orange or a bag of sweets.

In due course I moved up to senior school known as the ‘Top School’ or ‘Blue School’ now School House. Here Mr Rose was the head master and a good teacher. A first world war soldier, he had been with the cavalry regiment.  I remembering him saying that when peace was declared there was such excitement in the streets they could hardly control the horses. Lessons were always serious learning times: the 3 R’s, history and geography and practical skills.

Here I will pause and quote you a rhyme that I may have been responsible for!

Mr Rose was a very good man
He tries to teach us all he can
Reading writing arithmetic
But he never forgets to give us the stick
When he does he makes us dance
Out of England into France
Out of France into Spain
Round the world and back again.

I well remember the time my hand was on the receiving end of his cane, though I can’t recall what I had done to deserve it. Afterwards he said ‘go back to your seat Francis and don’t try to write for a few minutes’. You didn’t do the same thing again!

There were three classrooms one of which had a loft along one side. In here were kept spare learning materials, books etc and sometimes one of us boys would be asked to climb up a pair of wooden steps to bring down some of these. A very pleasant diversion from lessons! What would ‘Health and Safety’ have had to say about that?!

At the back of the building were two playgrounds one beyond the other on different levels, the lower one for the girls and the other for the boys. Beyond the boundary wall was a garden belonging to someone with dogs and we sometimes excited these until they were barking and jumping up at us, that was until their owners appeared! Otherwise marbles and conkers were the games we played. Some of us gathered our conkers from the four huge Horse Chestnut trees in the Leasows.  I remember we would say  ”if you can’t hit the conker hit their knuckles!” No time for sentiment!

Adjoining the school building was a boiler room and I remember at once stage it was my job to keep a daily check on the fuel for it and stoke it up if necessary. Miss Deverill was one of the teachers, she travelled each day from Blockley on her motorcycle, most unusual in those days for a lady to ride one. Miss Fullerton was another teacher.

Rev. Hitchcock came weekly to teach RE lessons and would take assemblies. He was very kind to the school. Sometimes his wife would come with him. She was a delightful, kindly lady, usually wearing a beautifully adorned big-brimmed black hat. Each year she would bring a big basket of apples from their orchard and give one to each of us children. Rev. Jacson (Rev. Hitchcock’s assistant) sometimes came to teach us instead. Every Easter we would walk up to the church for a service and I clearly remember the huge picture of the crucifixion of Jesus set up at the front of the church. It always impacted me deeply. End of term would see us all in church for a service and of course Christmas and Harvest Thanksgiving.

Sports lessons were unheard of back then and of course there were no school trips. Holidays from school usually meant helping the family with the tasks at home. No families took a fortnight’s holiday abroad or by the sea  as they do today. Our own family had one day’s holiday – a trip to the Malvern Hills!

In the winter breaks from school when snow had fallen we all had such fun. I remember my brother Sidney and I would drag our sledge to the top of Conduit Hill, tie it behind Eric Haines’ bigger sledge and along with other boys would speed all the way down into the town. On a good run we could reach Huyshe’s corner, provided other boys’ sledges didn’t get in our way! Of course there were no cars to avoid, but we had to stop when the work horses returned home from the fields.

We were taught the basics of gardening once a week at the school allotments which were on the left as you go up Cidermill Lane. This was no challenge to me as I was already learning these skills from my father, but nonetheless it was enjoyable and productive. Mr Rose would sometimes take two or three of us boys to help him in his garden in Sheep Street and afterwards we’d go into his house for a good tea. Each week the boys would walk to the Old Silk Mill in Sheep Street (now The Guild) for half a day’s woodwork lessons. These were undertaken in the ground floor room (where the coffee shop is today) under the direction of Jim Bunten. Working at one of the eight benches each with its own vice was a great opportunity to learn another skill. Jim Bunten lived in Broad Campden. He had a daughter Dorothy who was at school with me.

Some of my other fellow pupils were: Don Pitcher, Eric Haines, Denis Leadbeater, Olwyn Keeley, Geoff and Victor Wasley, Jack Smith and Steve Keyte. Steve walked in each day from Mickleton Hills. Some of the girls I remember were: Evelyn Potter, Ethel Turner, Lorna Stephens, Alice Simmons and  Ella Prentice. I was known as Little Squeak and my older brother Sidney as Big Squeak!

I remember bottled milk was delivered to the school daily and some of the children from the less affluent families were each given a bottle. There were no school meals so I walked home and back each lunchtime. The school day began at 9am and ended at either 4pm or 4.30. I remember on  the way home Froggy and I would sometimes stop by at Westcote House, one of the big houses a few doors away from the school, to see the Kingsley weavers at work. The front door was often open and we found it fascinating to watch their footwork on the loom as the shuttle went back and forth. I seem to think that they employed a lady who lived two doors away from the Ladbrook’s opposite the Catholic school playground.

I progressed well through school and was given the opportunity to sit the entrance exam for the Grammar school as had my two older brothers Lewis and Dudley. This was a great opportunity to continue to receive further education as there was no alternative to the Grammar school in those days. I could boast that I was the only one in my class who passed, but then I was the only candidate!  Mr Bright the head of the Grammar school invited me to attend the school one Saturday morning for an oral test. This I also passed and I remember him saying to me “I look forward to having you in the school next term.”  I went home to share the good news with my Father, who listened to me, his thumbs tucked into his waistcoat armholes. He then proceeded to tell me I would not be going as he needed me to help him work the land at Old Barn Farm that he had just been encouraged to rent. There was no arguing with him and I understood that this new challenge for him would benefit us all and provide better for our family. I remained at school and having reached Standard 6 was asked to help both Jack Smith and Don Pitcher who found learning more difficult.

I finally left school at the age of 14 to help Father on Old Barn Farm so setting the course of the rest of my life. Even though I never enrolled at the Grammar School I am pleased to have recently discovered that an ancestor of mine from Ebrington, Edgar Wheatcroft, was one of the first people to have ever won a scholarship. My schooldays in Campden were enjoyable years that stood me in good stead and left me with many happy memories.