You are here: Home>History>Campden Shops and Businesses>Prout's, and Keeley's - more information 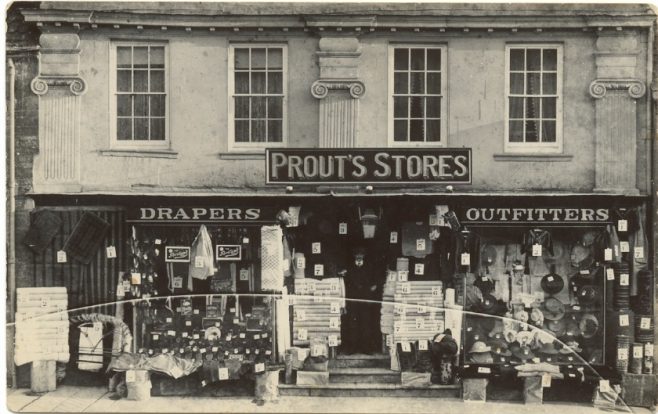 In the 1920s this was Prout’s store, selling clothes for the whole family

This photograph of Prout’s shop elicited a response from a family historian living in Margate, whose Grandfather Richard Capeling was a Manager when the shop was Keeley’s.

Happened to find the exact photo of Prout’s Stores in our heirlooms. Very interesting. My grandfather happens to be Richard J Capeling who was a co-manager in Keeley’s. On the back of Prout’s photo is written “our Robberts old shop now – owr (sic) prouts”? I also have a painting in our living room with the Keeleys on, painted by Constance [Sparling? ed.] 1939. 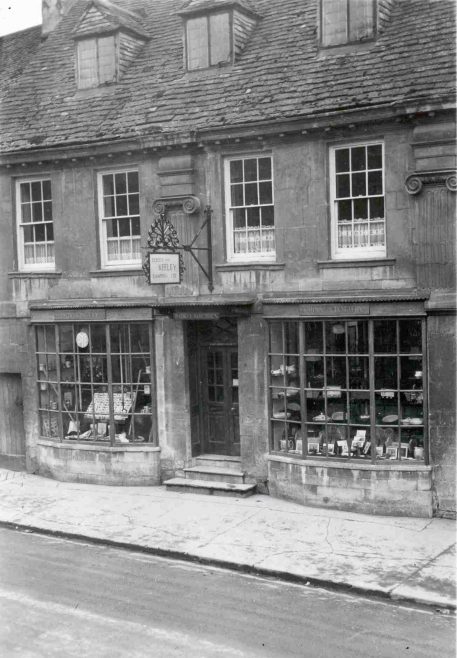 The shop when it was Keeley’s.

Our Enquiries Co-ordinator, Carol Jackson, was able to add some information:  “Our book, Trading Places, (copies available to order online) pages 31 -39, gives a fairly full history of the shop – from Roberts, to Prout’s, Elsley to Keeley, with lots of old photos and local memories.  It was our post office and useful hardware/everything store, until a couple of years ago and is now called Sam Wilson, a very nice designer’s studio shop.  Also in Publications on the website, in the section marked Notes & Queries, Volume V, Autumn 2007, you will find an article by Sue Allitt about the Roberts family and how they came to Campden and started their shop.

The only note of the name Capeling we have is in the Electoral Roll of 1960:  Annie E Capeling and Richard J  Capeling, their address given as Elsley House – which would be ‘above the shop’.  But what brought them to Campden, how long did they stay, where did they go next, any children, any photos, as we know nothing of his name until now.

I have been using this time at home (during the Covid-19 pandemic) going through old photos, coming across a passport of my great grandmother Annie Elizabeth Nicholls, Annie Evelyn Capeling’s mother.  Annie E Capeling used to make and sell wigs.

I am slowly in the process of creating a family tree and am getting back to 1795 on Dad’s side. I will still need to dig a little where Richard (Capeling) is concerned. Not sure how long he was with Keeley’s.  My Dad, John Charles Capeling was born in 1933 in Woolwich. He used to be an organist.  Before leaving for Africa he started an apprenticeship as an organ builder. He went to Zambia in the 50s working for Customs and Excise and did not return to the UK until married to my mother, originally Danish, in Africa in 1971. We all moved back to the UK in 1973.  I was born in Cheltenham, baptised in Tewkesbury Abbey 1972, before returning to Zambia for Dad’s final year in service. They decided to come back to the UK after Zambian independence so as not to have to send me back to boarding school. We started back in Tewkesbury, then when Pop died in 1974, we moved over to Ely.

Dad being the only son of Richard, never seemed to throw anything away, so I do have quite an extensive collection of photos right back to the 1800s. Sadly Dad passed away in 2001 at the age of 67.

My mother is still alive.  Her father was chief engineer during Niels Bohr’s time in the Carlsberg Breweries in Copenhagen and she was privileged enough to have lived on the Old Carlsberg grounds for a number of years. My only excitement, thanks to travelling parents, I did spend most of my youth cooped up in the Royal Danish Ballet School for 6 years. And now, following family history in some respects I suppose, I have managed to open up a café in Margate, Ask Annie ltd. The signs above the shop have been hand-carved out of wood by a real Rhodesian local to Margate believe it or not. Full of history and I may say I am proud to be part of it.

The only person who is now alive and knowledgeable about Richard and Annie is my Godmother up in Mansfield as she, her sister and my dad were very close growing up during the war. I cannot remember if I sent any photos, but here are a couple for now. One shows a Bowling Club Dinner, Chipping Campden, without a year on. One of the photos is Richard’s and Annie’s Silver Wedding in 1957.  A John Carver has also got in touch with me as he seems to be descendant of my Great Grandfather 4th generation early 1820’s, his brother Henry.  I am also playing with the thought of passing the name Capeling on to my oldest Son, Oliver Daniel or my youngest son, Mertcan John Charles to continue the Capeling name our side.