You are here: Home>History>Campden Shops and Businesses>Smiths Butchers - end of an era

Smiths Butchers - end of an era

Sadly ‘Smiths the Butchers’ has closed after 100 years in business.  However, the new owners have re-opened the shop as a butchers and delicatessen, Fillet and Bone. 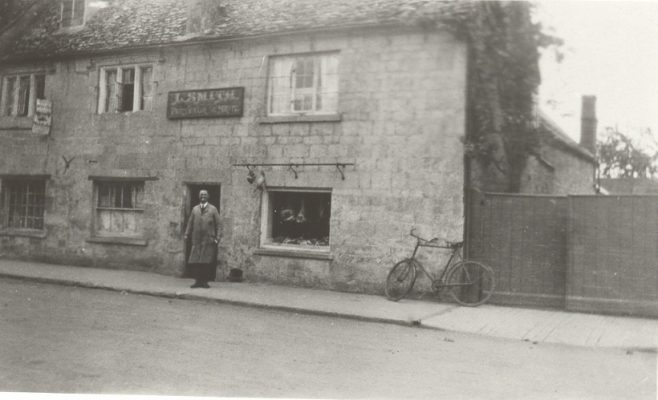 Lewis Smith outside his shop

Lewis Smith had been sent as a boy from Campden to London, to be apprenticed as a butcher. His brother Owen worked at the local Post Office, but joined Lewis in 1912 when they set up as butchers in the shop formerly occupied by William Hobbs, saddler.  Lewis and Owen went to War in 1914; their sister tried to keep the shop going but in the end  had to close it for the duration of the War, from which only Lewis returned.  Lewis reopened the shop, which  was really only the front room of the house. In those days butchers’ shop windows were unglazed; there were no car fumes to contaminate the meat, although there must have been plenty of dust from the dirt roads.

The advert says ‘Pork when in season’. Pork was traditionally an autumn meat, coming to market after a summer of being fattened, hence the association of cooking it with apples.

Robert Smith, Lewis’s son, was expected to join the business:

The shop was where Molly (my sister) and I got our schooling, Molly in the office and me learning the trade. We’d come home from school and I was straight into my smock and apron behind the counter.

People had accounts in those days and you had to know who had their meat wrapped in brown paper and who had newspaper. One day I was serving Miss Moody, the retired school teacher, and I wrapped her two lambs kidneys in newspaper and soon got told off by Father. 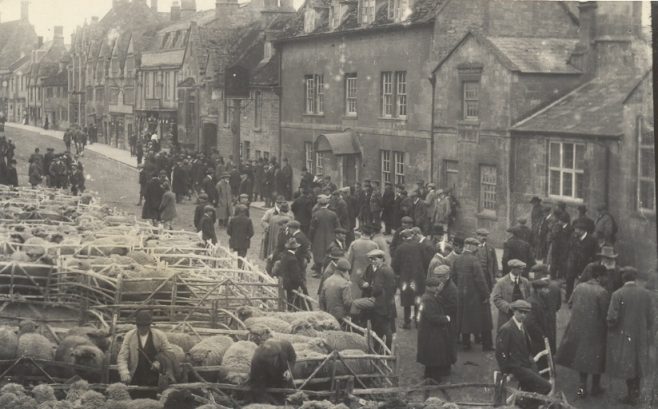 Alf Hathaway remembers the shop in the 1940’s:

Behind Smith butchers shop, the house was part of the way down and it was just the slaughterhouse beyond that and they had to bring the cattle in through the side gates – I don’t think there was a back entrance on Calf Lane…. It was sheep in the Square and cattle and pigs down the back on the same day, Wednesday. The sale yard was down the Noel Arms – it was quite an arena down there with the auctioneer’s little hut at the end  of it, just beyond the Bowling Green. 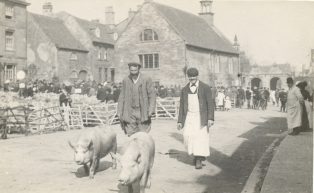 Driving pigs away from market

Chris Smith took over from his father and ran the shop, no longer slaughtering at the back, until its closure on 10 September 2016.