Campden Shops and Businesses in 1863 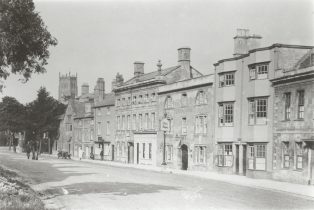 Modern Telephone Directories include Yellow Pages to help us find shops and tradesmen. The Post Office Directory of Gloucestershire, 1863, did not need to do that. After all, without such easy transport as we have these days, let alone the telephone and the internet, what shoppers needed was to know what was available where they were planning to go to shop.  So each place had a separate entry.  Chipping Campden was a ‘small market town’ but it did have ‘a railway station’, market day was Wednesday and fairs were held on Ash Wednesday, 23rd April, 25th July, 30th November and 11th December. In those days, fairs were not just the jollifications with roundabouts, swings and so on that we know today but were also occasions when outside salesmen and stallholders could come and sell wares not regularly available.

Do you want to buy a loaf?

George Aston, Robert Bricknell, Joseph Richardson and William Wynniatt were all bakers. So too was Joseph Haydon, who was a miller as well.  A less obvious mix of goods was offered by William Hodgkinson, baker and fishmonger.  You could also buy a loaf at the Volunteer it seems, for Richard Griffin was both landlord and baker.

Landlord and Butcher – or Tailor?

There were others who combined one trade with another.  Of the nine public houses, the landlords of three had another source of income. One has been mentioned above – and William Wyatt of the George and Dragon was one of the two butchers. It was not necessary to go to a pub to get a drink though, for eight beer retailers are listed. One, Thomas Savage, was a tailor as well. Four other tailors are listed, but they appear to have stuck to the one trade.  Joseph Hands was both grocer and chemist, Charles Decimus Matthews was a druggist and grocer while Benjamin Ward was a grocer and dealer in British wines.  A stranger combination perhaps was that of Charles Izod who was a maltster and a coal merchant.

There were four shopkeepers: in Campden, William Herbert, Mrs Lettuce Collett and Emanuel Tomes and, in Broad Campden, Robert Yeates, – but what they sold is not given. The latter was not the only place to buy things in Broad Campden for one of the beer retailers, Thomas Keyte, was a resident. The Angel Inn  was there too; the proprietor, John Such, must have been kept busy being also the only wheelwright listed for the area.

Altogether about fifty occupations and trades are listed, from auctioneer to wine dealer including blacksmiths, a cooper, several drapers, a greengrocer and gardener, hairdressers, a painter & glazier, a poulterer, shoemakers, the stationmaster and many more.. There was also a physician, a surgeon and a solicitor let alone a bookseller (also the stationer and seedsman), even a coachbuilder and, of course, a variety of members of the building trades. It would not have been necessary to go outside the town for any of the necessities of life, few if any of the luxuries – and certainly not for beer or wine!