You are here: Home>History>Campden in Wartime>The Mystery of the German Prisoners of War in 1918

The Mystery of the German Prisoners of War in 1918 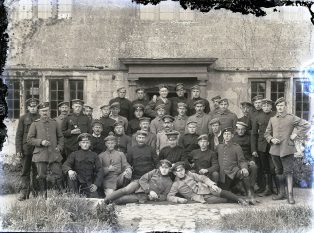 The prisoners of war outside The Priory
Jesse Taylor 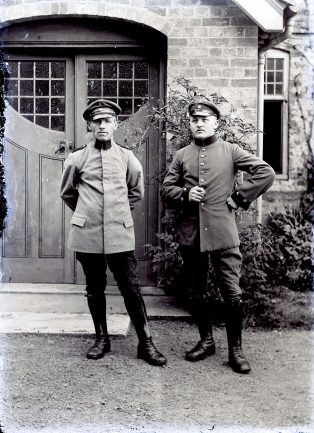 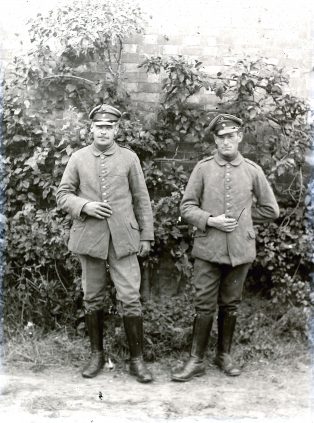 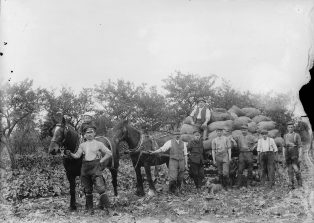 The POWs at work with local farmers
Jesse Taylor 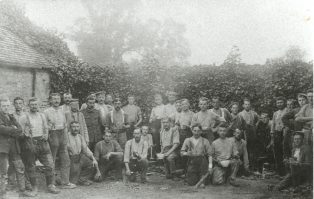 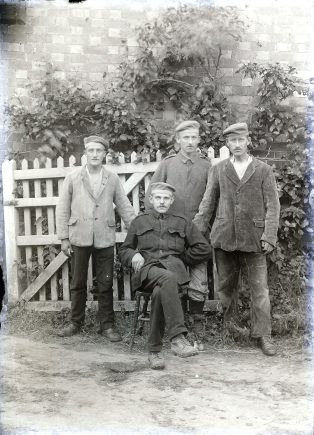 Some POWs at The Priory
Jesse Taylor 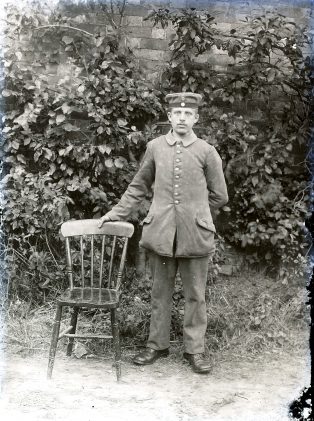 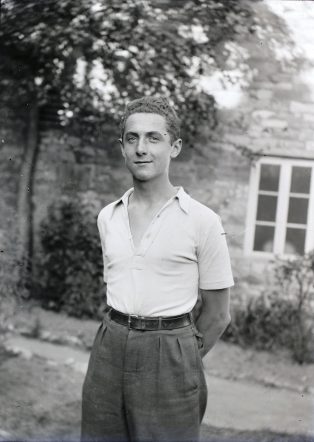 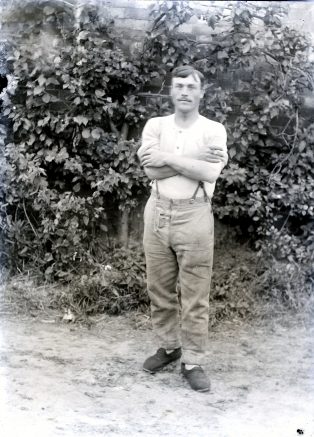 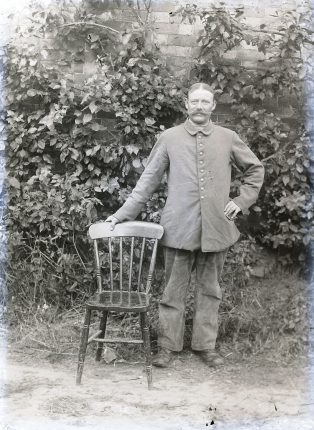 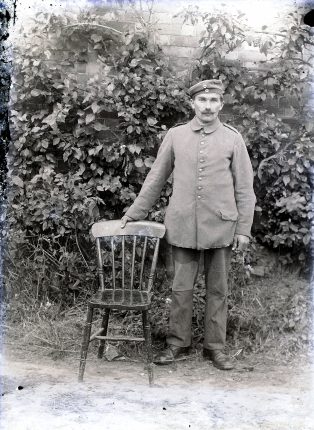 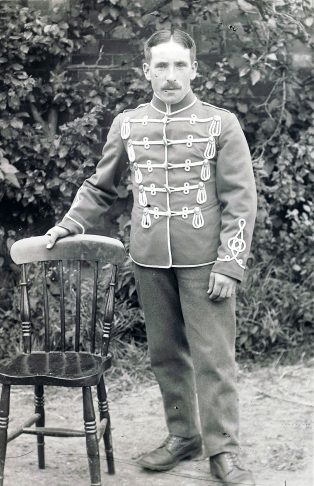 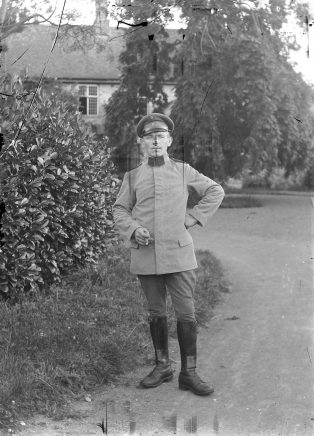 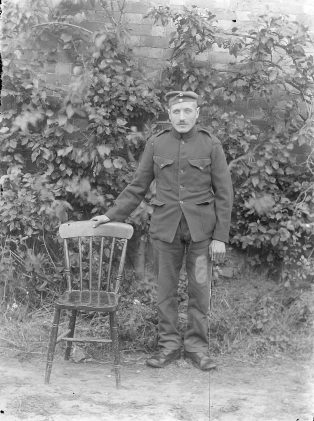 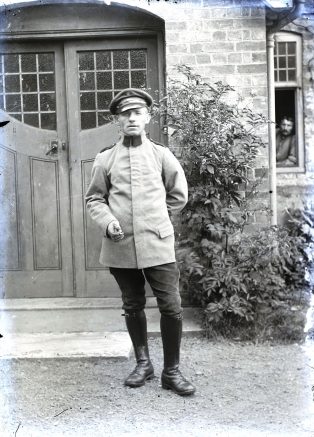 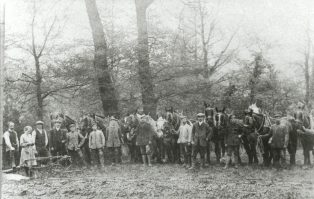 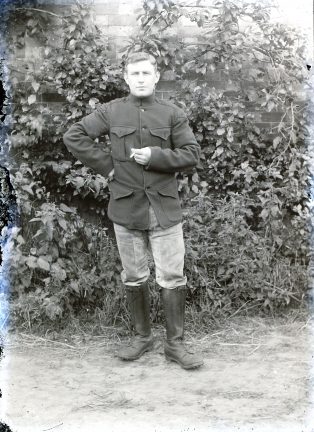 In 2008 we were awarded an Awards for All grant to conserve and digitise some photographs on glass plates, taken by Jesse Taylor, Campden photographer 1896 – 1938. The digital images then had to be catalogued, and the great search began, to identify places and people.

Two intrepid volunteers drove around the area endlessly, identifying places and even some people, making full use of their detective skills.

Where was the camp?

But there were some photos that surprised us – men in unfamiliar uniforms and in unfamiliar settings. We eventually established that they were World War 1 German uniforms – but where was the camp? Then earlier this year staff from Gloucestershire Archives came to Campden Library with WWI records, books and Minutes of County Council meetings. There we found a mention of horses being used in Mickleton – from the prisoner of war camp in Broad Marston.

On the trail again!

This time our sleuths struck gold – a ‘The Priory’ in Broad Marston was identified from a photograph that showed the sweep of the drive and the interested owner gave a tour of the property.

More research was needed but sadly little was found – there were no records specific to the camp and only one brief item in the local newspapers at the end of the war – but we had the Minutes of Gloucestershire War Agricultural Committee and perhaps the prisoners of war will be recognised via the internet.

The first German prisoners of war arrived at Dorchester Camp, in Dorset, on 10 August 1914.This became the holding centre from which the men were sent to work camps around the country.

1916: Farmers getting desperate for help

In 1916 the ‘Derby Scheme’ was introduced, requiring all men to sign up for active duty unless the local War Tribunals gave them exemption. In spite of loud protestations from farming communities, agricultural workers were not exempt and this further reduced the number of men available for working on the land and producing much-needed food.

The ‘German Prisoners Scheme’ was brought in, whereby the men who were thought to be trustworthy were sent to agricultural working camps around the country. The camps were administered by district sub-committees of the County War Agricultural Committees.

It appears that the first prisoners in this area came to Evesham – in March 1917, 75 men were allocated to Toddenham Orchard Company.

The German prisoners of war have really come to Evesham at last, billeted in Bengeworth near the new Drill Hall. There are eighty in number, come from Dorchester. ‘There were crowds of people in the street and we are glad to say there was not the slightest demonstration of hostility’.

The situation for farmers everywhere was getting ever more desperate as they did not have the manpower to plough the fields and plant the crops.

In January 1918 Gloucestershire War Agricultural Committee (GWAC) discussed the establishment of camps of German prisoners and the conditions were explained; Northleach was suggested as a suitable centre.

A letter was sent in February to all the Gloucestershire District Sub-Committees pointing out that it was ‘of great urgency’ to get German units, and in March the Committee expressed their disappointment at not getting a fair allocation of labour. By September there were 500 prisoners in the county, but this was felt to be inadequate for the farmers’ needs.

Setting up the camp

It appears that the working camp at Broad Marston was set up under the jurisdiction of Mickleton Sub-Committee in the late spring of 1918, with around 24 horses and a group of prisoners of war. The Clerk to the Mickleton Sub-Committee was Mr R S (Richard Sampson) Margetts who was head gardener at Norton Hall (in the 1911 census living in Gardeners Cottage with his family) and he corresponded with the Gloucestershire War Agricultural Committee about the terms and conditions for the men.

The men would have been allocated to different farms in the area and were probably found accommodation by the farmers if they were staying overnight. In September the ‘Commandant’ reported to GWAC that he was not happy about housing the threshing gangs in travelling vans, but that they should stay in cottages or farm buildings.

In August 1918, following an inspection of horses in the various camps in the county, Gloucestershire Committee issued a notice to the effect that:

prisoners must walk up hills; that brakes must not be overloaded, and that horses must be saved in every way possible. However, in September there was a favourable report on the Mickleton camp after an inspection of the horses.

16 October 1918, an estimate was put before the Gloucestershire Committee for repairing the floor of the stabling at ‘Broad Marston Lane’. This location has yet to be identified.

The only newspaper item that might refer to the camp appeared in the Stratford Herald on 20 December 1918 when it was reported that at Long Marston:

a most enjoyable and sociable evening was spent in the schoolroom, its origin being due to the desire of the parishioners to contribute towards the fund for the prisoners of war. There was a whist drive, food and a ‘mock auction of various useful articles’.

In early January 1919 the question was considered of closing Mickleton camp as the soldiers would not be able to carry on after the German prisoners were withdrawn.

In February 1919 the horses throughout the county were being sold or loaned to farmers: the stable at Mickleton was reduced from 24 to 15 horses. George Haines, a farmer at Campden, enquired about the sale of implements at the Mickleton camp.

On 22 March it was reported that Mr Margetts had written to say that he would be unable to carry on at Mickleton due to lack of men. The County Committee decided to close the camp. The prisoners may have already left by then, presumably to be repatriated home.

We hope to find out more about the camp and particularly the men who were there.