You are here: Home>History>Campden in Wartime>Italian POWs in Campden in WWII

Italian POWs in Campden in WWII 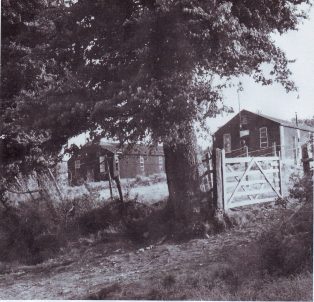 The Nissen huts used for the Italian POWs WWII 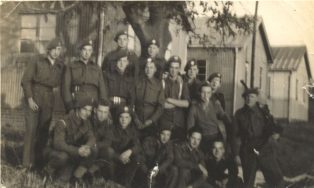 Unknown soldiers - are they POWs?

On the right hand side of the road to Broad Campden, in Keyte’s Field, Catbrook (now The Green), there was a small working camp of wooden huts erected for the Italian POWs. Tales of generosity from the cookhouse door and learning about spaghetti are still told.  We have this blurred photo of unknown soldiers – are they Italian?

Memories of the POWs

“There was a Nissen hut for the office, one for the canteen and two, or maybe three, huts for the POWs. I was a young girl living in the council houses on the opposite side of the road and we went around there quite freely. Sgt Spinetti was the senior officer – he made us a strong sledge, big enough for six of us. We went down Keyte’s field next to the camp and we had to jump off before we hit the ditch at the bottom! They had lots of dried fruit in their ration boxes, so we would go over to the cookhouse with a bowl and bring back some fruit for Christmas puddings.”

Many of the Italians were musical and Alf Hathaway being a musical boy at that time would go across the road to hear them sing and play the many and varied instruments they had with them. One man played the mandolin which particularly caught Alf’’s musical ear. The Italian was so impressed with Alf’’s playing that, unknown to Alf, he spent many hours making a mandolin which on completion he presented to Alf. Alf was so pleased to be the proud owner of such a fine instrument that he played it every day on returning from school and kept it for many decades until it became to fragile to play.”

I was living in a cottage on the Ebrington side of the level crossing during the war years. A number of Italian prisoners had been billeted in Campden and were put on various work details; one of which was sent to work along the railway track. They were issued with a day’s rations as they were there all day. One of the prisoners, a cheerful young man who was always singing, would be sent to my house for hot water to make coffee.

The Italian prisoners worked hard and were always cheerful. Their escort was a solitary sergeant with a rifle. At around ten-o-clock each morning the sergeant hung his rifle in a tree and went off up the hill where he would spend a large part of the day in the Eight Bells, returning in the evening in time to escort the Italians back to Catbrook.

When I first realised what was happening I was to some extent apprehensive at the thought of the prisoners being free, unsupervised and the thought of what might happen to me. I had no reason to worry as the prisoners carried on regardless of the lack of supervision. One day I plucked up the courage to ask the young lad what they thought of the sergeant being missing and did they think of escaping. The young man laughed and said “No-one runs away from paradise. If we could have our families here with us we would be happy to stay forever.”

The sergeant got his comeuppance and was transferred away from Campden to the disappointment of the Italians who all said he was a good chap and they all liked him.

The Camp was built during the first years of the war in a field belonging to W. Keyte of The Sheppey. The site was about four acres in size and was surrounded by a wire fence but not escape proof.

There was a large building with accommodation for about 10 soldiers who acted as guards, with the cookhouse and mess room, another one was toilets and showers and I think there were three long accommodation blocks for the prisoners. They were not dangerous people and went out in parties to work on the local farms. There were two long covered vehicles kept there for this purpose. The drivers were Charlie Currall from Moreton-in-Marsh and Eric Bond who married Ellen McGrale from Catbrook.

They grew a lot of their own vegetables and one of their favourites was lettuce. When the lettuce was big enough they would pull them up, wash them under the tap and hold them in one hand and a bottle of vinegar in the other, tipping the vinegar on and eating it, they loved that.

Us Catbrook kids as we were then used to go to the wire fence and the Italians would give us Scribona Swiss rolls and fruit pies, not available in the shops during the war. We got to know some of their names, Bruno, Michael, and Alfredo Spossini who eventually married Betty Grant from Ebrington and spent the rest of his life here.

Eventually they were allowed out of the camp for some freedom as they were no longer a threat to us in the war. They asked for toothbrushes and pieces of wood and various items to make things as a lot of them were skilled craftsmen but they had very little in the way of tools. One, Michael, was a skilled carpenter in Italy and he made a picture frame for my mother and carved across the top was the word ‘Recordo’ which in Italian is ‘Souvenir’. On Sundays some of them went down Campden to the Catholic Church. They loved to play football.

After the war most of them went home, a few remained and the camp was called a hostel and was used by Irish labourers. Later the camp was cleared and the large unit was made into three units of accommodation for Tommy and Nellie Handy, Dorothy Powell and her mother, and Gordon and Kath Hathaway. The shower unit was used by Campden football team.

One who didn’t go back

Alfredo Sposini, a PoW from Southern Italy, was stationed at Prisoner of War Camp 31, Ettington Park, and came to Ebrington to work with Farmer Stanley, where he met Betty Grant, an Ebrington girl. Alfredo stayed on after the war and they married, living in Ebrington until his death.