You are here: Home>History>Campden in Wartime>Campden in the Civil War 1642-45 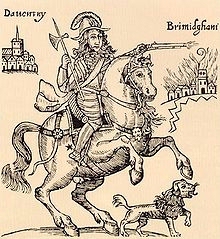 Today Campden appears so peaceful that it is difficult to imagine that any fighting could have taken place here. Indeed early histories seem to have taken this for granted and as will be seen later at least two people were vilified for their actions as a result. More recent studies have shown that the war between the Royalists and the Parliamentarians did indeed affect this place.

Get the whole story in our book ‘I marched straight to Cambden’ £5.50 inc. p&p

Your king – and Lord of the Manor – needs you!

At the start of the war Lord Edward Noel was commissioned to raise 500 horse. Later he raised three regiments of horse and three of foot soldiers. We do not know how many joined up from Campden but for many young men it may have seemed an opportunity to see a bit of the world and perhaps get some loot. The Cavalier band led by Lord Edward’s son, Baptist Noel, was known as the `Campdeners!’

Campden at the Crossroads

Campden throughout the war supported the King’s cause and though it was spared the sieges and major battles that so damaged other places it did not escape hardship and some military action, for its location close to certain key routes ensured that it was from time to time deeply involved.

Warwick and Gloucester were held for Parliament and the Fosse Way was regularly used by Roundhead forces. Worcester and Oxford were Royalist and the route linking them passed through or close to Campden shortly before crossing the Fosse Way. As a result foragers from both sides from time to time came to find food and loot here, while on occasion Royalist troops were based here to harass the Roundhead convoys. Occasional skirmishes round about and even within the town occurred. Indeed in October 1643 a night attack by troops from Warwick upon a regiment quartered here left many Royalists dead and others were taken captive.

Then, as today, in normal times Dover’s Games were held very early in June, but in 1644 the Games were cancelled by William Bartholomew, Vicar of Campden. As a result he has been described as a ‘Puritan’ by some historians. However the King and his army were marching westward from Oxford closely followed by the Parliamentary army at that very time through Moreton-in-Marsh, Broadway and Evesham.  Even if there had been a wish to hold the Games all the men who would have taken part were already in one or other army – or trying to hide their animals and produce from the foragers.

In August that same year Campden was seized and held for about a couple of weeks by a Parliamentary force which had to be withdrawn as the necessary reinforcements did not arrive.  By then things were not going well for the King and Prince Rupert sent an expert on fortifications to report on Campden House, for he planned to send troops to occupy it. The reply was that it could not be fortified nor held against a siege. All the same, in January 1645 Colonel Bard was sent with his men to hold it. He immediately wrote to Prince Rupert saying that he was busy fortifying Campden House.

May it please your Highnesse Excellency, I thought good to signify to you that I am here at Cambden House, with my forces which I conceive will be very advantageous towards strengthening this association of your Highnesse, as we are taking great pains, with spades, mattocks and shovels, ‘planting the Gospel’ [fortifying]…

Curiously this report was captured by the Roundheads and sent to London. Bard knew there was a Roundhead spy in the vicinity. No archaeological or other evidence has ever been discovered to suggest any earthworks or other type of defences were ever installed. Because they believed the place to be well-fortified the Roundheads were later wary of attacking.

Read all about it!

In London the news was received with horror by the Parliamentary Committee and orders were given to Colonel Massey at Gloucester to collect troops in all secrecy and attack Campden House. However the possibility of secrecy was lost when the whole matter including the order to attack was printed in the then equivalent of a newspaper. Who was responsible for this astonishing leak to the Press?

15th January 1645: We are informed by some letters intercepted, that the King’s forces are about to fortify Campden in the Co. of Gloucester. If they should perfect that work it will be of very ill consequence in many respects and especially, as it is designed, to cut off all intercourse between you and Warwick. We therefore think it necessary that the enemy be removed from thence by all means, and so recommend it to you to be done with all possible speed.

Some months later during which Colonel Bard and his troops had regularly harassed the neighbouring Roundheads, the Royalists found it necessary to withdraw the garrison. The situation meant that the King needed the largest possible army but Prince Rupert knew that the Warwick Parliamentarians would take and hold Campden House against him if it were to be left empty. So he ordered it to be burnt down. Sir Henry Slingsby, in his Memoirs, said:

… the Prince commanded it to be burnt, which I set on a light fire, before we marched off, a house as my Lord Cambden says that hath cost £33,000, in building and furniture.

All the same, Colonel Bard was been blamed by many historians over the centuries for his wanton destruction of the great house, perhaps because of his reputation as an adventurer. What has rarely been mentioned is that the troops, arriving very quickly from Warwick to take over the house, not only found it already burning, but ran into an ambush left by Colonel Bard.

Could the story be true that his jocular remarks offended a Campden farmer who would have had him put in the lock-up if he had not hastily apologised?

10 September 1651: Having avoided being stopped and recognised by Roundhead troops in Stratford-upon-Avon, Charles II and Mistress Jane Lane rested overnight at the manor house at Long Marston.

Thursday 11 September 1651: They travelled on to Cirencester; by tradition through Campden and Longborough, to join the Fosse Way without risking passing through Moreton-in-Marsh where another troop of Roundheads was lodged.