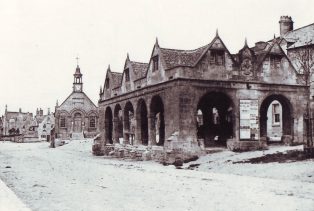 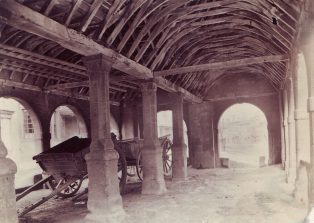 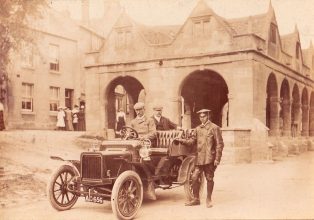 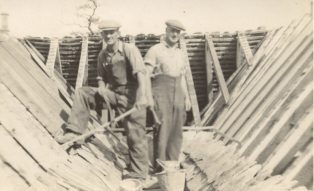 The Market Hall was not a Wool Market as is sometimes said, but a Produce or Butter Market.  It was built to enable the women of the town to gather and gossip while they sold their produce – eggs, butter, cheese, bread – in a sheltered environment. It is possible that it was built on the site of a previous Market Cross.

Sir Baptist Hicks, a wealthy trader in silks, satins and fine fabrics in Cheapside in London, bought the Manor of Campden in 1611.  As well as building a splendid mansion, he became an important benefactor to the town – funding the pulpit and brass lectern in St James’s Church, building Almshouses near the Church for twelve poor people, saving the Grammar School from financial ruin and arranging for the Market Hall to be built in 1627.

It is built of Cotswold Oolitic Limestone, as are most of the old houses in Campden and it thought that the cobbled floor is original, never having been disturbed since it was laid.  Above is an example of a Cotswold stone slate roof, with each stone slate held in place by a single wooden peg through a hole resting on the wooden cross strut.

There is no evidence to show when the use of the Market Hall for the women’s food market might have changed but from the 1850s the building was used for storing carts. The Town Corporation Accounts for 1857 show that John Angell paid for the use of the Market Hall for one year for the Postman’s mail cart and in 1858 Joseph Mitchell and Charles Petty paid one year in advance to 1859 for its use as well as Joseph Taylor the postman. The photograph taken in the early 1900s shows carts there.  At this time some renovation was done, including the addition of stone balustrades between the arches on the roadside.

In the 1940s the whole structure was to be sold, dismantled stone by stone, beam by beam and shipped in crates across the Atlantic to be re-erected in America.  However the Campden Trust, a local conservation group founded by artist and etcher F. L. Griggs, stepped in, bought it and so stopped this loss to Campden.  It was subsequently passed to the National Trust for its care.