It was only in 1972 that these arms were granted to Chipping Campden.  Frank Holland, then Town Clerk, set down all the indications of the past and present history of the Town and these were amalgamated to produce the arms granted.

The official description reads as follows:

Arms – Gules on a pale between two woolsacks Or an ear of wheat slipped and bladed Gules on a chief engrailed Or a pale Gules between two cocks heads erased respectant Gules and charged with a chalice Argent.
Crest – on a wreath of the colours on a garb fesswise Or banded Gules a swan rousant proper charged on the breast with a torteau therson a fleur-de-lys Or and holding in the beak by a ring Gules a fleece Or banded Gules. 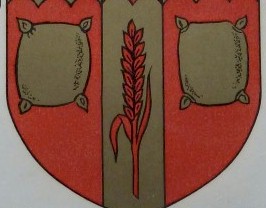 So what does that all mean?

The two woolsacks and the fleece hanging from a ring in the swan’s beak allude to the medieval wool trade which brought prosperity to the town.  The principal wool merchant was William Grevel and the swan on the crest was taken from his family’s (Greville/Grevel) crest; 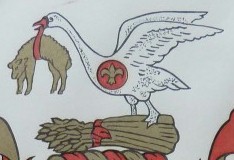 The ear of wheat and the wheatsheaf on which the swan stands refer to the farming and food production background of the district and also  to the Campden Food Preservation Research Station, as Campden BRI was then known;

The red roundel with a gold fleur-de-lys on the swan is from the arms of Sir Baptist Hicks (first Viscount Campden); 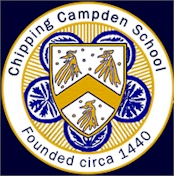 The two cocks’ heads allude to the badge of the ancient Grammar School, taken from the arms of the school’s founder, John Fereby;

e silver chalice refers to the Guild of Handicraft and present day silver-smithing and craft.

The colours red and gold (‘gules’ and ‘or’ in heraldic terms) are those used by Sir Baptist Hicks and are the principal colours of the arms of the Noels, Earls of Gainsborough;

The motto alludes to the architectural stonework and buildings of Chipping Campden.

So modern Coats of Arms granted these days can tell a story, even though they were originally invented to enable warriors in armour to recognise each other on the battlefield or when jousting.