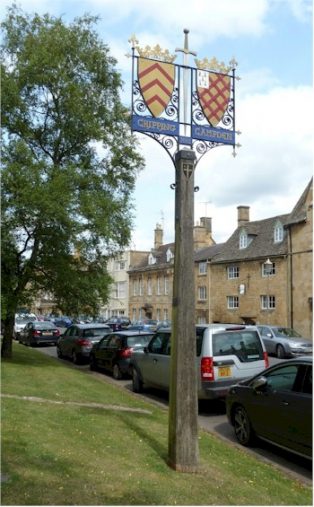 The heraldic town sign stands on the north side of Campden High Street on the grassy bank eastwards of the Market Hall, almost exactly where the old George and Dragon Inn post stood in years gone by.

Designed by Wentworth and Reynell Huyshe

The sign was commissioned to commemorate the Millennium in 2000, paid for by public fundraising and erected in 2001.  It was originally designed by Wentworth and Reynell Huyshe in 1924 for an exhibition, the intention being to erect it near the gateway to old Campden House, by St James’s Church.  Wentworth Huyshe*, a journalist, author, artist and traveller, with a taste for heraldry and the Middle Ages, was the stepfather of Will, George and Fred Hart and settled in Campden in 1906. 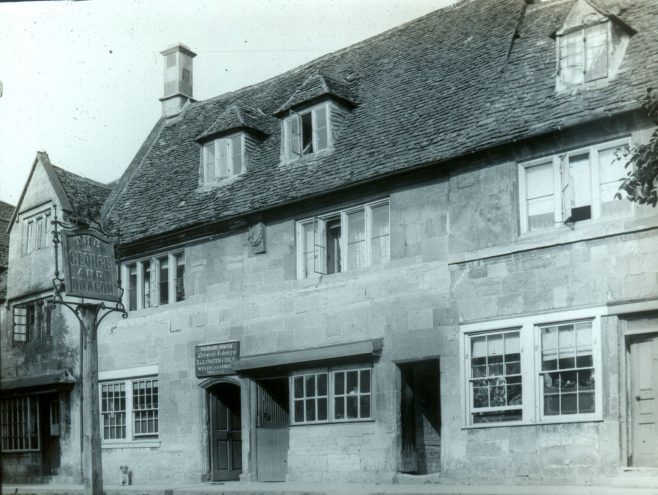 The sign consists of two shields, each surmounted by an earl’s coronet and containing a coat of Arms. The shield with 3 red chevrons (Or, three chevronels gules) is the arms of Gilbert de Clare, 5th Earl of Gloucester and briefly Lord of the Campden manor in the early 13th century.  He was one of the lords who was a surety for Magna Carta.  The Huyshe family pedigree chart shows the line of descent from the daughter of King Edward I, Joan of Acre, who married Gilbert de Clare (1243-1295), the 7th Earl of Gloucester, who was involved in the Battle of Lewes with Simon De Montfort. 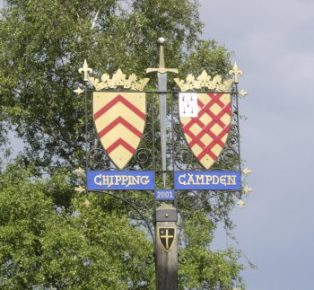 The shield with the ermine marks and red cross hatching (Or, fretty gules, a canton ermine) is that of the Noel family, Lord of the Campden manor in the early 1600s.   Lady Juliana Hicks, elder daughter of Sir Baptist Hicks, married Edward Noel of Rutland and it was their descendants who became Earls of Gainsborough.

Between the shields is a sword which is there to signify what in 1924 was believed to be the earliest dated event in the history of Chipping Campden – a battle fought ‘on the fair green below Camperdene’ between the Kings of the Saxon heptarchy and Britons in 689.   However, since the only record of this battle was from Yorkshire, this was investigated by Allan Warmington and his result was published in 2002 in the journal CADHAS Notes & Queries (Vol. III p. 68) with the title, ‘Why the year 689?’   In it he showed that the battle more than likely took place in Yorkshire at a place with a name remarkably like that of Campden, but which has not survived in use. 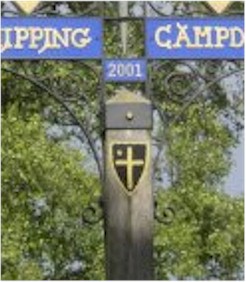 Lower down on the shaft of the sign is a small shield with a cross, the arms of William Grevel, perhaps the most important of Campden’s wool merchants, whose large memorial brass is in St James’s Church in front of the altar and whose house from 1380 still stands in the High Street.  His descendants were related to the earls of Warwick. 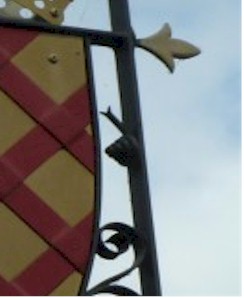 The forged snail creeping up the framework on the right is the trademark of Jeff Humpage, a wrought iron craftsman, who made the sign (his trademark also appears on the rail beside the path leading to St James Church and on one of the rails in the Church).

* CCHS has published a book about Wentworth Huyshe; you can buy a copy online by going to the Publications page.