Saxon Lords of the Manor included Earl Godwin of Wessex who died in 1053, succeeded by his son Harold, who became King of England on the death of Edward the Confessor and died at the Battle of Hastings in 1066.

The Anglo-Saxon Chronicle records that in 1085 King William ‘spent Christmas with his councillors at Gloucester, and held his court there for five days… the king had important deliberations and exhaustive discussions with his council about this land, how it was peopled, and with what sort of men.  Then he sent his men all over England into every shire to ascertain how many hundreds of hides of land there were in each shire, and how much livestock the king himself owned in the country, and what annual dues were lawfully his from each shire. … what or how much each man who was a landholder had in land or live-stock and how much money it was worth. …’

After this in 1086 it is recorded that ‘ he did as he was wont, he levied very heavy taxes on his subjects, upon any pretext, whether justly or unjustly.’  The Domesday Book record for Campden reads: 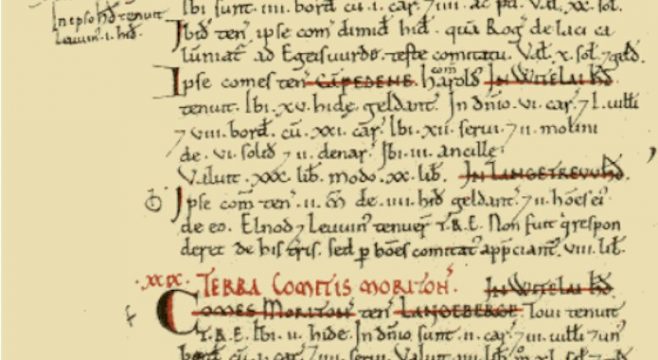 Lords of the Manor

Nicknamed ‘Lupus’ (the Wolf) and ‘Vras’ or ‘le Gros’ (the Fat); gifted the Manor of Campden by his uncle, William I.  Hugh was a doughty warrior who spent much of his life after the Conquest pacifying the more northerly part of England and then beginning the attempt to annex Wales. He died on 27th July 1101.

Drowned in the wreck of the White Ship alongside Prince William, heir to the throne of England, on 25th November 1120.

Richard’s cousin.   Possibly did not hold the manor of Campden.

‘Gernon’ = moustache; Possibly inherited through his marriage to Matilda, daughter of the Earl of Gloucester, as a Charter of this period grants Campden to him at the time of his marriage.  This might mean that the Earls of Gloucester held the manor from Richard’s death.  Died 16th December 1153 having held the manor for the remainder of Henry I’s reign and most of the troubled reign of King Stephen.

Gave homage to Henry II on 29th September 1162 for the earldom of Chester.  Joined the feudal revolt in 1173 and in the following year the Earldom and lands were taken from him and vested temporarily in an agent of King Henry II.  Died 30th June 1181.

Held the manor on behalf of the king; he developed the township by laying out a market street on a new open site.  He has in the past been identified as one of the knights who murdered Thomas à Becket in 1170.  However it is now considered that this is incorrect.  At that time at least three knights were known by that name, including one who was Sheriff of a county and another who was tutor to one of the king’s sons.

The estate may have been restored to Hugh in 1177, when he was restored to the earldom of Chester, or it may have remained under the ‘management’ of de Gondeville.

Gave homage to Henry II in 1188 for the Earldom of Chester and most, if not all, of the lands, including Campden.  In 1218 he went on the 5th crusade. He died, aged 60, in 1232 and his lands were divided between his four sisters. Mabilia inherited Campden in right of her son.

During the minority of her son, Hugh, the manor was once again held by an agent for the king, Henry III.

In 1235 Hugh gave homage for the earldom of Arundel and presumably gained the manor of Campden at the same time.  He died in 1243.

After Nichola’s death in 1240 Roger re-married.  In 1273 Roger’s son by his second marriage, also called Roger, succeeded to the Barony of Dudley.  However, Campden followed the female line of his marriage to Nichola, being divided between the husbands of his four daughters Margaret, Joan, Mabel and Maud.

Each part of the manor then had a different line of holders for several years through Ralph de Cromwell, married to Margaret; John le Strange, husband of Joan; Walter le Sully, husband of Mabel and Henry de Erdington married to Maud.  So from 1273 to 1544 the estate was divided.

For more information on the Earls of Chester