Rivers are usually thought to have carved the valleys in which they flow. Campden, however, lies in a bowl in the surrounding hills and the ‘river’ Cam is far too tiny to have cut through the limestone to have been responsible.  Indeed it is one of a number of similar small watercourses now described as ‘misfit streams’.  So what agency could have produced the rounded hills that surround the Town?

“Most of the British landscape … is characteristically glacial in both geomorphology and sediment distribution.”

‘Campden’s Changing Landscape’ is a topic studied by a CCHS Research Group and whilst others have walked and examined the history of the fields, boundaries and inclosures, I attempted to go back further to discover why and how the bowl in the surrounding rock had come about. 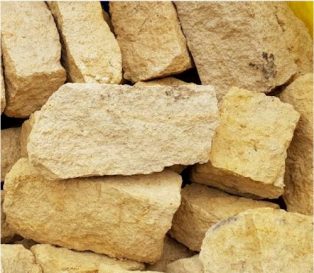 Oolitic Limestone from the Cotswolds

This limestone rock is called the Inferior Oolite; ‘inferior’ not because of its quality for it includes much superb building stone, but because it was formed earlier and is therefore below the Superior Oolite. Both were laid down in warm shallow seas in the Jurassic period. However our present landscape is of course much younger and the product of quite different conditions. Some 2 million years ago a series of Ice Ages began, divided by ‘interglacial’ warmer periods. I have read that we are at present in such a period for it is only about 10,000 years ago that the last Ice Age ended with the edge of the ice-sheet by then to the north of the Cotswolds.

Each Ice Age can wipe out most of the signs of earlier ones but a plan showing the edge of an early one shows the ice sheet lying to the south of the Cotswolds. This is known as the Anglian Ice Age, over 400,000 years ago, when the northern ice-cap stretched at least as far south as Bristol. Other later ones might well have covered this area too. The ice and the deep frozen ground beneath would have shattered the upper levels of the rock, grinding it down. Towards the end of each Ice Age the edge of the ice cap shrank slowly northwards, exposing the land surface beneath. But there would be hundreds of years, even perhaps millennia, afterwards when the ground remained frozen, as tundra, receiving deep snow in winter and having a very short summer thaw period. This would occur during the whole period for a large surrounding area too if the ice did not reach quite so far southwards. 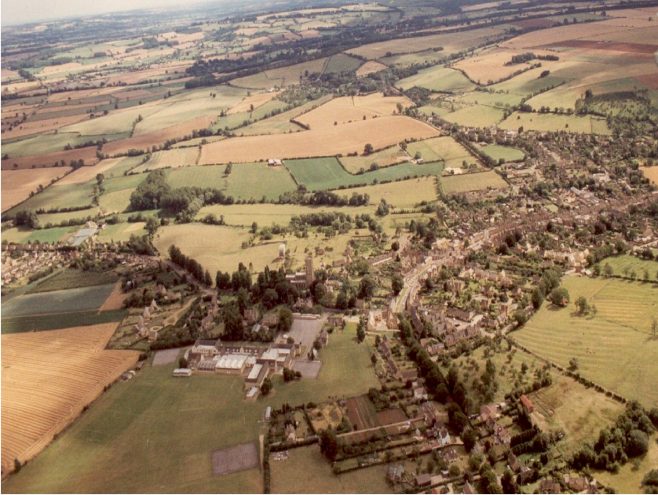 In the time of this thaw each year the meltwater would not be able to sink into the ground because the upper few feet of the bedrock remained frozen and impervious. So there would be raging torrents cascading down, scouring channels. Fractured limestone resulting from the frost might well have slumped downhill together with such soils that might have developed. Seasonal streams carrying rock fragments eroded valleys and carried the debris away.  In some places large beds of gravel or silt can be found that were brought to their present positions by such torrents or otherwise water borne.  None has been found anywhere here in Campden, nor any obviously apparent silting however, other than in the vicinity of the Cam.

As said above, the Cam is far too small to have produced the present landscape, but the line it takes suggests that it might be following the track of an earlier river.  The lowest part of the central town, either side of the Cam, was never built on – except for sheds, ‘hovels’ and suchlike – until after the second World War, because on the upper levels houses could be built with their foundations on rock (and of course were above the danger of floods).  The lowest level, on the banks of the Cam, was of silt. The depth of that silt in some places has been established in the last few decades by builders seeking to know the depth to bedrock.

A number of test drillings have shown the depth of the silt in several places. At the rear of the Lygon Arms the silt varied between 6 and 7½ metres. Close to the Silk Mill in Sheep Street bedrock was found 8 metres below the present surface. When the area behind the Old Police Station was tested preparatory to building there, rock was found about 10 metres down. The plan to set the foundations on bedrock of the houses behind the Noel Arms had to be abandoned when more than 10 metres of silt, peat and, lowest of all, glacial outwash was discovered. Thus the raging predecessor of the Cam must have carved itself a deep course, which has subsequently been infilled by silt and the occasional landslip for the clay, underlying the limestone, can sometimes fail to support the rock above.

The amount of silt is far less than what must have been dug out and carried away by the ‘Pre-Cam’ and there is little certainty as to how high the river water rose at its peak times.  It has been suggested that the levels now occupied by roads such as the High Street might have been cut as river terraces.  There are ways in which ice sheets and ‘solifluction’ can produce terraces however so this is uncertain.

As for the enormous quantity of water that must have deluged down at the end of each Ice Age, where did that go?  Whatever happened earlier, at the end of the last Ice Age there was a vast glacial lake receiving meltwater from many places, including the Campden area.  It is now called ‘Lake Harrison’ and formed in between the southern edge of the ice-cap and the Cotswolds and other high ground and was initially blocked by the remains of a glacier from discharging all its water into the Severn Valley.  It is thought to have extended as far as Coventry and perhaps Birmingham, certainly covering Stratford-upon-Avon.  It disposed of its overflow water initially via the Fenny Compton Gap and the Cherwell and later more dramatically during the slow thaw, through the Avon and the Severn.

After the frozen ground had thawed in the better weather, normal erosion could begin again. Plants, shrubs and trees that had retreated south gradually began to move northwards.  Birch trees appear to have been amongst the first. This verdure would have inevitably been colonised by animals and birds.  Stone Age Man would have followed, but that is another story.  In the Cotswolds the hillsides became covered with grass, shrubs and trees. Soils began to develop. Here a small stream collected the outpourings of a number of springs and carried the water away along the easiest route which was the silt filled course of the earlier river.  Not being as powerful it just zig-zagged along the marshy low-lying land.

The highest ground by then had taken on the rounded form of the hills we know today, whether scoured down as part of the ice-cap or just fractured by the permafrost.  The limestone had been eroded and weathered and the deluging meltwaters had carried away the resulting rubble thus producing the present bowl in the hills. Of course some of the broken fragmentary pieces of limestone still remained in the newly forming soil, ready to be used later for field walls and even some buildings.

At the beginning of this piece I said that it was very speculative and I repeat this warning here.  No formal detailed study has yet been done on the specific origins of Campden’s landscape.  As a result, this has been based on a variety of other studies.

A number of the many works consulted, with a few more quotes, are listed below in addition to the one quoted at the beginning.

The Geological History of the British Isles,  OUP (2004):
p.117: ‘it is probable that all rivers from a line from the Thames to the Severn, at one time or another, carried significant volumes of glacial meltwater, producing a series of valleys, which are occupied by much smaller misfit rivers, too small to have cut their valleys to their present state’.
p.274: ‘effects if each glacial advance tend to be removed from the land … during the subsequent interglacials and by the glacial erosion of the next ice advance itself.
The Geomorphology of the Cotswolds, Andrew Goudie & Adrian Parker, Cotteswold Naturalists Field Club, Oxford (1996).  [much information on the Vale of Moreton & on Lake Harrison]
Fundamentals of Geomorphology, R J Rice, Longman (1988), p. 264, fig. 13.6.
Geomorphology, B W Sparks, Longman, (1971), p. 429 fig.14.10.
Interpreting the Landscape, Michael Aston, Batsford, (1989).