Tho’ your letter prepared me to expect a very great advantage from the Inclosure, I was not a little surprised at the very considerable increase of income, and I think myself much obliged to you for your great attention to my interests.

An Act for dividing, allotting, and inclosing, the Open and Common Fields, Meadows, Pastures, Downs, Wastes, and other Commonable Lands, within the several Hamlets or Tythings of Berrington, Broad Campden, and Westington, in the Parish of Chipping Campden, in the County of Gloucester.

This meant that the area to be inclosed consisted of the whole of the parish of Chipping Campden, except for the chartered town itself, the already enclosed estates of Campden House (The Combe), and Northwick Park and some small pieces of ancient inclosures in the town.

The Noel family were by far the largest landowners in the parish; most of Lord Northwick’s land was in other parishes and the named gentlemen held relatively small areas. There was therefore little problem in achieving support for the Bill and it became an Act on 1st May 1799.

The reason given for inclosure in the Act

whereas the lands of the respective proprietors in the said open and common fields lie intermixed and dispersed in small parcels, and in their present situation are very inconvenient, and incapable of any considerable improvement, but, if the same, together with…other commonable lands, were divided…and allotted to and amongst the said proprietors,…and such allotments inclosed, great advantages would arise to the parties concerned…

The Act appointed Samuel Reeve, of Ketton in Rutland, Hugh Jackson, of Stamford in Lincolnshire and John Stone, of Pull Court, Worcestershire as Commissioners.  They were required to be “not interested in the said Inclosure”, and to be “disinterested persons”, and were obliged to take an Oath of Office requiring them to act “impartially and honestly…without favour or affection, prejudice or malice”.  However, Samuel Reeve was the Noel family agent in Rutland, Hugh Jackson was the Noel family lawyer in Stamford and John Stone was Lord Northwick’s lawyer in Worcestershire, so hardly disinterested! The idea that other people in the wider community might have interests that needed representing doesn’t seem to have occurred to anyone!

The Act appointed Thomas Eagle of Baginton, Warwickshire and Henry Clarke of Shipston upon Stour, Worcestershire as Surveyors, who were to undertake “a true and perfect Survey, Admeasurement, and Plan” of all the lands to be dealt with under the Act.

There must have been a documented survey or map of Campden parish immediately prior to the inclosure, and a map setting out the awards made – they were required to be kept in a chest in the church – but sadly both these documents are lost. 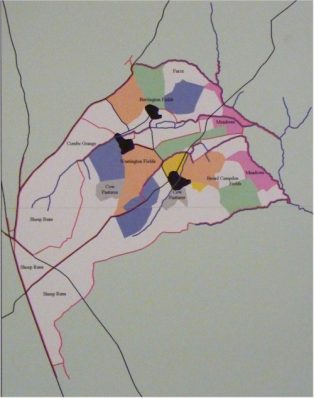 The Act would extinguish all sorts of ancient rights relating to the land to be enclosed: “right of soil”; “right of commons”; glebe lands. Gerard Noel Noel was not only the major landowner, he was also the Lord of the Manor to whom these rights belonged and so he was to receive specific allotments of land to recompense him for their loss.  Tithes were also extinguished by the Act, and both Gerard Noel Noel (as Lord of the Manor) and the Vicar were to receive land allotments in lieu of the tithes. We can begin to see why the Rev. Harris was so pleased with the outcome!

There doesn’t seem to have been much dispute or contention over who owned what land, nor over how that land should be rationalised and consolidated into the Award. More time was spent on details of the roads – for instance, should the track up the hill from Broad Campden to Blockley remain a bridle way or be upgraded to a carriage and drift road (see webpage on Roads, Ways and Footpaths.

the Award shall be final, binding, and conclusive, unto and upon all Parties and Persons.

The Commissioners were each to be paid £2 2shillings per day; this money, together with all the other costs of implementing the Act, “shall be borne, and defrayed, by the several Owners of, and Persons interested in, the Lands …to be allotted.  The Vicar, however, was exempt from all such charges. Failure to pay any due share of such costs was enforceable by court order.  The Commissioners appointed Edward Cotterell, solicitor in Campden, as Clerk.  They held meetings in the George Inn (now the Noel Arms) and by 30th September they were dealing with appeals and representations about roads and bridle ways and served notice on the various landowners to pay their share of the expenses.

The winter of 1799-1800 was spent considering all the detail, hearing representations, and refining the draft.  The final award document – the Inclosure Award 1800 – was signed on 19th March 1800.

It took them just over ten months to complete the exercise, which is a pretty impressive timescale. 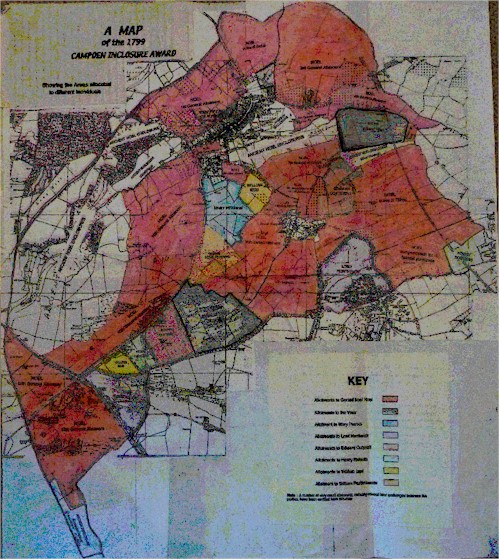 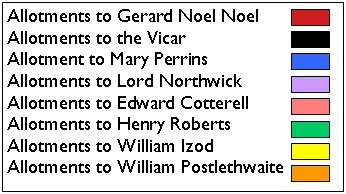 Special allotments were made to the Lord of the Manor and to the Vicar, in recompense for their loss of tithes, glebe lands, rights of commons, and rights of soil. Everything else was given in general allotments to the existing landowners. The amount of land each individual received was exactly proportionate to the total of their previous holdings.

The measurements of each allotment are set out in acres, roods, and perches, but it is difficult now to map and plot exact locations. It is further complicated because several of the individual allotments were then exchanged with other individuals, in an attempt to further rationalise the grouping of parcels of land.  Each allotment description is also accompanied by specific requirements related to the fencing of the land.

In summary, the allocations were as follows:

There were seven “special allotments” of land for stone and gravel pits, for making and repairing the roads. The dimensions of each pit are given, but it is difficult to map their precise locations, other than the general area names given. No doubt some detective work could locate them more precisely.

The Award concludes with details as follows:

Herbage: – directions as to who has the ownership of/rights to the grass and herbage growing on the verges of roads and bridleways, or at the stone and gravel pits. In summary, on public carriage roads, it is the adjoining landowner and on bridleways and private carriage and drift roads, it is the landowner over whose land the routes pass.

Watercourses: “It shall not be lawful for any person through whose allotments the said watercourses do pass to divert, alter, or obstruct the course of the same.”

Ditches:  to be maintained and repaired at the expense of the landowners, who are to be responsible for keeping all ditches and watercourses of “sufficient breadth and depth, (and) open, scoured and cleansed…so as the water may always have free communication and be noways hindered or obstructed from running”.

Bridges and tunnels to be laid in gateways: where necessary to secure the free passage of water in the watercourses, landowners were required to make convenient bridges and tunnels. “Convenient”, presumably, to enable pedestrians and/or vehicles to pass across.

On the 19th March 1800 the Commissioners signed the Award, and pinned a formal notice on the Church door:

We the Commissioners…do hereby give notice that we have set out and allotted all the open and common fields, meadows, commonable lands and waste grounds within the hamlets or tythings above named to the several proprietors and persons interested therein according to their respective rights and interests;  And that we do hereby order and direct that all right of common in and over the same shall from and after the nineteenth  day of March next ensuing cease and be for ever extinguished.