The Impact of Inclosure 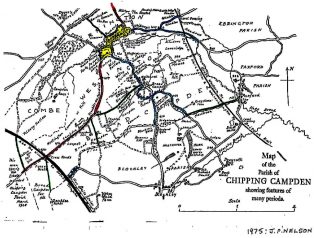 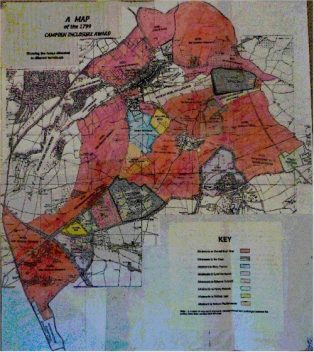 Inclosure established the pattern of fields, hedges, fences, walls, that are the hallmark of our landscape – very different from the open downs and commons of previous generations.

There was huge pressure to increase food production because of the rise in population and the move to towns and cities, where people could not grow their own food. There is no doubt that inclosure played a major role (along with scientific and technological improvements in agricultural practice) in achieving an unprecedented increase in food production. Land was better and more productively managed. The Victorian Age simply couldn’t have happened without this.

This is an extremely complex and controversial area. However, there are a number of consequences of inclosure which seem incontrovertible:

Inclosure deprived many poor people of access to subsistence farming.  They could no longer graze animals on common land, nor access the wastes, etc for fuel, nor scrape a subsistence food supply from small strips of land. Whereas poverty and hunger had, to some extent, been managed within the village in the past, there was now no structure for that to happen. The increase in vagrancy and poverty in the C19th – and the increasing political efforts to deal with it through the Poor Laws, workhouses, etc. – was surely significantly linked to the social impact of Inclosure.

There grew a view that the distressed poor were an unfortunate, but necessary and inevitable consequence of progress – what today would be regarded as “collateral damage”. Whilst the distress might call for philanthropic relief, it could not be prevented.

Local social contract and the psychology of inclosure

The basis of the local social contract changed. It was not a matter of land ownership – the wealthy and powerful had always owned the land and they still did – but the sense of local rights and obligations, of mutual social support, had changed.  The psychology of inclosure, with all its walls and fences, reinforced a sense of exclusivity and proprietorship. The Victorians were obsessed with personal ownership.

The rise of the Industrial Society

The drift from country to town accelerated exponentially. We became an industrial society.

The same landowners who had the land in the first place, still had it, albeit in more rational and efficient holdings.  However, one side-effect of inclosure was a significant increase in land values and rents, which together with changes in agricultural methods, made small landholding uneconomic.  Many small owners, and particularly small tenants, were forced to sell up to the large landholders, and thus reinforce the consolidation effect.

Percy Rushen in the section on inclosure in his “History of Campden” (1911) wrote:

“The fact that the object of the Acts was to enclose common fields and wastes of manors seems to have led many to think that land common to the public was taken from it, and that under these Acts wastes such as are now termed ‘commons,’ and often owned by the public, were seized.  This is very far from the truth, and it cannot be too well understood that the public as such never has had any legal right to land or the fruits of it.

…The effect of Enclosure Acts was good without doubt. … The only people who really suffered were those who had been accustomed to take the produce of soil or wastes without any colour of right, instead of supporting existence by invigorating work.” (pp95-96)

But it has to be remembered that Rushen was himself a landowning gentleman.

Twentieth century historians have tended to see things rather more in terms of social and economic change, for example, E.P. Thompson, “The Making of the English Working Class”.  For a really left-field view, then George Orwell, writing in Tribune in 1944, was quite forthright:

“Stop to consider how the so-called owners of the land got hold of it. They simply seized it by force, afterwards hiring lawyers to provide them with title-deeds. In the case of the enclosure of the common lands, which was going on from about 1600 to 1850, the land-grabbers did not even have the excuse of being foreign conquerors; they were quite frankly taking the heritage of their own countrymen, upon no sort of pretext except that they had the power to do so.

Was it a good or a bad thing?

It just isn’t that simple!  Was it inevitable? – almost certainly.

There were huge benefits, but also clear downsides. It was certainly seen as a good thing at the time and subsequently as a major component of the industrial revolution, but its ramifications were complex and played a part in changing our society beyond recognition.

Perhaps we should leave the final word to a popular folk rhyme: