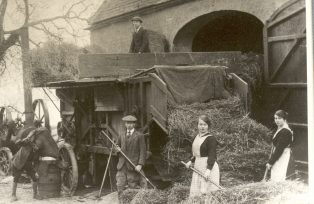 Before 1800 the hamlets of Berrington, Broad Campden and Westington had comprised mainly open land with a sparse population, but within two hundred years the nation’s rural community had shrunk from 87% of the population to 20%.  After the Inclosure Awards Campden’s land was owned as to 72% by the Noel family, 8% by the Vicar of St. James’s and 5% by the local solicitor-cum-land agent and property owner Edward Cotterell. The Vicar’s land had been awarded in lieu of tithes and he leased what is now known as Campden Hill Farm to Edward and John Horsman. The tenants were required to erect farm buildings, stables and a cottage (but not a farmhouse). There were to be seven fields, equal in size as far as possible.  The types of crops and a seven year rotation system were also specified.  The Horsmans were not farmers themselves but appear to have been bankers who eventually became bankrupt.

The lease of what became known as Lapstone Farm was brokered by the lawyer Cotterell on behalf of the Reverend Hamlyn Harris.  The Vicar rarely, if ever, set foot in Campden as his primary living was in Rutland.  However, correspondence to Cotterell showed how very keen he was to ensure collection of his rents which had risen considerably after inclosure.

The Alleine family were tenants of Campden Hill Farm followed by the Warners of Broad Campden and in 1911 by John Hobbs.  It remained in the ownership of the Church until the 1920s and became part of the Northwick estate in 1970, by which time it had increased in size to 227 acres.

The Cotterell family proved to be money wasters, with no record of them after 1823, when William Holmes became owner of Lapstone Farm and it was he who had built the farmhouse, although he was not himself a farmer.  There did not seem to have been any long-term tenants and the farm was purchased by Lord Northwick in 1867.  Richard Keeble became tenant and was succeeded in the 1890s by Fred Badger who, with his wife Ellen, lived in the farmhouse until his death in 1975.  The farmhouse remains to this day as a residential tenancy but no longer are there farmers on the Northwick estate, which is now owned by Mr. Ian Bond.