You are here: Home>History>Religion in Campden & District>The History of St Catharine's Church

The History of St Catharine's Church

In the 13th century, when a market became well established in Campden, a new church was built in Berrington and dedicated to the Virgin Mary.  This predates the church now dedicated to St. James, though the medieval porch of the earlier church and a great deal of the early fabric remains. In the first church, there were two chantries dedicated to St. Katherine for singing masses for the souls of the dead.  In Edward VI’s reign, following the dissolution and Henry VIII’s break from the church, the chapels were dissolved.

The influence of the Noel family from the nineteenth century

Subsequently we know little of Campden’s Roman Catholic history until early in the 18th century when those that kept the faith walked over the hill to Foxcote House, which stands above Ilmington, where the Canning family kept a priest to serve the chapel.

Roman Catholicism had been outlawed since the reign of Elizabeth I and there were strict laws limiting the political and legal entitlements of Catholics until a relaxation of these restrictions was made in the 1827 Catholic Emancipation Act and by 1850 the Roman Catholic hierarchy was re-established in this country.

While studying at Cambridge, Charles, Viscount Campden, had become deeply interested in the Oxford Movement and it was during his and his wife Ida’s continental travels that they became drawn to Catholicism. They were received into the church in 1850, the year the Pope restored Catholic bishops and dioceses in England.

The following year Charles and Ida moved to ‘new’ Campden House at Combe.  In 1848 Charles had had a chapel built that was licenced for Anglican worship but, following their conversion to Catholicism, the chapel of our Lady of the Annunciation was converted to Catholic worship. Campden House soon became a centre of Catholic and intellectual life. Meanwhile, the Chaplain was serving a growing Catholic community and Charles, who had succeeded his father as the second Earl of Gainsborough in 1866, commissioned the building of a school and chapel in Lower High Street.  This was staffed by Sisters of Charity of St. Paul and opened in 1869. The school was extended in 1881 and favoured the whole community. 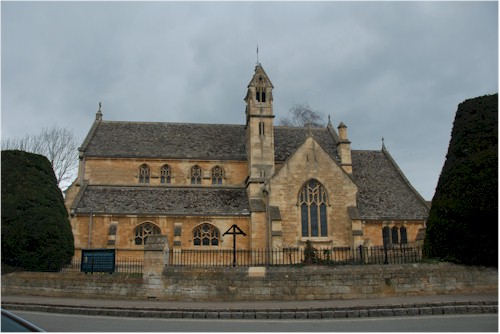 By 1881, the third Earl, Charles William Francis Noel, had succeeded his father and the same year he donated land at the junction of Cow Fair and Back Ends for the building of a church on the site of an old barn. Including a generous donation from the Earl and his wife, the cost of the church was met by community donations and fundraising that included a weekly lottery and penny readings in the Noel Arms.

The church was designed by the architect W. Lunn of Malvern and the opening ceremony was performed in September 1891.   The church is built of local stone in the early Perpendicular style that prevailed in the reigns of Henry IV and V,  harmonising with other ancient buildings in the town. 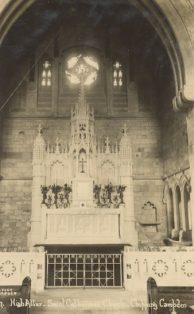 Dedicated  to St. Catharine, the church consists of a nave, aisles, chancel and transept, with a sacristy and outer sacristy and a fine bell turret surmounting the south transept. The High Altar was the work of sculptor A. N. Wall of Cheltenham. On the right-hand side of the chancel are three Sedalia let into the wall, carved in stone.

The nave is sixty-five feet in length with a total height of forty feet. Between this and the north aisle is a beautiful arcade of four arches with eight windows in the clerestory above. The nave roof is composed entirely of red deal and is of very beautiful construction, the beams being ornamented with fine carvery and tracing. That of the chancery is of English oak, unpolished and arranged in panels and enhanced by some richly carved oak tracery covering the wall plate at the base.  The church seats approximately 250 people in deal pews.

The windows and stained glass

The architect, Lunn, favoured ornate tracery with every window having a slightly different pattern. The stained glass in the chancel and north chapel windows is by the London firm, Lavers and Westlake, but much of the church glass was designed by Paul Woodroffe:

The Campden architect, artist and author, F. L. Griggs was received into the Catholic church in 1912, and the following year he persuaded his sister, Winifred Gillett, and her husband to commemorate their joining the church by commissioning the bells. Griggs himself rang the first Angelus.  The bell turret is on the south side between aisle and transept. The tower contains two bells, Sancta Maria and Sancta Catarina, both cast by John Taylor & Co. of Loughborough in 1913 and rehung by the same firm in 2001.

A new organ built by J.W. Walker and sons, subscribed for the parishioners was formally dedicated in 1915. 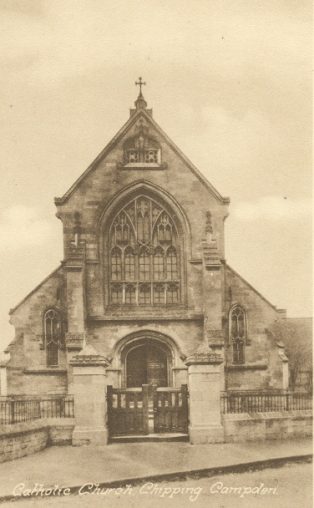 The West front consists of a moulded arched doorway, finely carved with heraldic shields of the Papal arms on one side and those of the Earl and Countess of Gainsborough on the other. Above the doorway is the handsome west window with fine tracery, and enriched with pinnacles and battlements, showing the beautiful lines peculiar to Perpendicular architecture. In the gable end above is a richly carved niche enclosing a small statue of St. Catharine carved by Alec Miller.

A Priest’s House was built adjacent to the Church in 1938, designed by F L Griggs, with an exterior carving by Eric Gill. 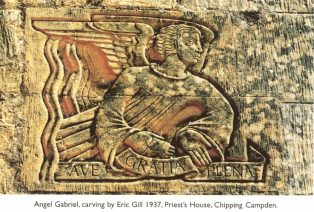