You are here: Home>History>Religion in Campden & District>Churches, Chapels and Meeting Rooms 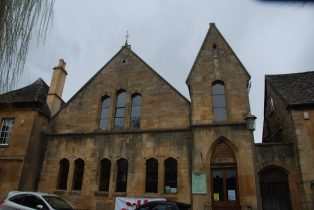 In 1724 a certificate was presented to the Bishop of Gloucester saying that Presbyterians intended to hold a meeting to worship God in a new house built for that purpose in Chipping Campden.  This Campden meeting house became a Baptist Chapel when the Rev. Elisha Smith arrived as pastor in 1785.  A new Baptist Church was built  to replace the chapel, with a manse and schoolroom in  1872. 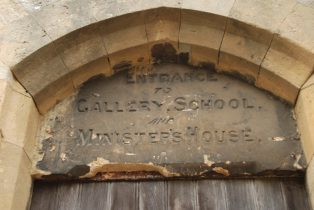 Inscription over doorway of Baptist Church

The doorway at the side of the Baptist Church has an arch with an inscription over it “Entrance to Gallery School and Minister’s House”.  What was the Gallery School?  Does anyone have more information?

A Quaker Chapel was established in 1663 and this ceased to be used by Friends in 1874, the building becoming a sort of village hall, used by other Nonconformist denominations, but was bought back and re-established as a Quaker Chapel in 1962.  See also Notes & Queries, Vol 1, page 26. 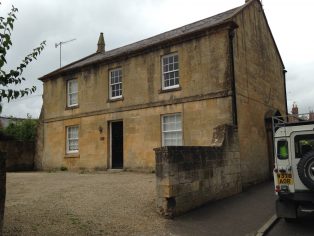 There used to be a Norman chapel, dedicated to St Mary Magdalene, which dates from the late 11th or early 12th century, which was possibly the site of the first parish church as Broad Campden was then the main centre of population for “Campedene”. It probably fell into disuse after the Dissolution and became derelict, until C.R. Ashbee rebuilt it as a private house in c. 1908 for the Anglo-Sinhalese geologist, art expert and writer, Ananda Coomaraswamy.

In about 1180 Hugh de Gondeville, the lord of the manor, established a new chapel, dedicated to St Katherine of Alexandria, which was endowed with land in Westington to pay for the services of two chaplains.  The exact location of this chapel is unknown, but could well have been on or near the site of the existing Parish Church in Berrington.

St Michael and All Angels Church was built in 1868 by the 2nd Earl of Gainsborough in memory of his father.

Built in 1855 at the junction of Sheep Street, Catbrook and Westington but demolished by the end of the century, some of the stones being used in the building of the Catholic church.

A congregation of Plymouth Brethren had a Meeting Room in Park Road until the late 20th century.