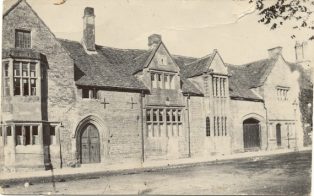 There are three monuments to William Grevel – the “Flower of the wool merchants of all England” – in Campden:  the house on the High Street known as Grevel House, the ledger stone or brass in the chancel of the parish church – and the church itself (then dedicated to St. Mary the Virgin) to which William Grevel contributed money for re-building, thus creating one of the finest ‘wool churches’ in the Cotswolds.

Little is known of William Grevel’s ancestry except that on the ancient Roll of the Guild of the Holy Trinity, Coventry, the names of ‘William Grevel of Campedene and Mariona his wife and Richard Grevel, his father’ are recorded.  The family was of Norman or Flemish extraction, and had settled in Chipping Campden by 1276.

William Grevel was perhaps the richest and most influential of the Cotswold wool merchants of his day.  The large memorial brass in Campden church calls him ‘quondam civis Londonie et flos mercatorum lanarum totius Anglie’ – “sometime citizen of London and Flower of the wool merchants of all England”.  Grevel invested his profits from trade in property.  In Campden he built the house now known as Grevel House and by the time of his death in 1401 he held 14 messuages and 2 virgates in the town, as well as purchasing the manors of Lasborough (1395), Meon, Charingworth, Welford, Weston-on-Avon and Milcote, where he lived in the last years of his life;  he bought land at Sezincote (1386) and the manor of Charlton Kings (1387).  He also acquired land in Pillerton, Mickleton, Ilmington, Pebworth, Longborough and elsewhere.  He was wealthy enough to lend money to the king, for in August 1397 King Richard II acknowledged receipt of 300 marks from “William Grevel of Campeden”, promising re-payment in the “Quindens of Easter next” (i.e. fifteen days of Easter).

William died in 1401; the Probate of his Will is dated at Campden April 2 1401.  Some of his property remained in the possession of his widow and second wife, Joan, sister of Sir Philip Thornbury, (his first wife, Mariona, died in 1386) while the rest was distributed among his sons.  John and Ludovic were his principal heirs.  His other children were Richard, William,  and two other sons whose names are not known, and a daughter, Alice who married Edmund Ludlow (d.1409), who owned ‘Ludlowes’ manor in Campden.  Ludovic made his home at Drayton in Oxfordshire whilst John’s share included Lasborough and Sezincote, settled on him at the time of their purchase.

John started his career in his father’s business: in October 1395 both men took out royal letters of pardon for trespasses against the statute regulating the purchase of wool; and it was perhaps the father’s confidence in John’s sound business sense which prompted him to name him among his executors.  However, John ceased being a merchant not long after his father’s death and concentrated on acquiring property.   By 1412 Greville’s lands in Gloucestershire were estimated to provide an annual income of £20 (around £12,500 in modern terms), and by 1420 he had acquired more property through his in-laws, including the manors of Ebrington and Farmcote in Gloucestershire.

Greville’s involvement in local administration, predominantly in Gloucestershire, had begun in 1403 and continued until his death 40 years later, during which period he served three terms as sheriff, four as escheator and was a JP for about 24 years.

It was probably his ability in financial matters which brought John Greville into close contact with Thomas, Lord Berkeley, and Berkeley’s son-in-law Richard, earl of Warwick and the Countess of Stafford. But the most important nobleman to make use of Greville’s services was Henry V’s brother, John, duke of Bedford. Greville was in the duke’s service at the time of his election to Parliament later that year and he most likely remained Bedford’s retainer for at least six years longer, sitting in four more Parliaments.

John Greville died on 30 Sept. 1444. His heir was his son John, aged 17, who, following the demise of his grandfather’s widow in 1449 was also to inherit other family properties, including Milcote.  Much of the property remained in Greville hands until at least the 17th century.  Descendants, through Ludovic’s line, included Sir Fulke Greville, the Elizabethan poet and statesman, who became the 1st Lord Brooke and through this line descended the Earls of Warwick .

In the name of God Amen  In the year of our Lord one thousand four hundred and one the second day of April I William Grevell of sane and good memory make my will in this manner.  Firstly I leave my soul to all powerful God and my body to be buried in the church of Blessed Marie of Campeden
Item I leave the church of Campeden one hundred marks for making the new work at the disposition of my executors …
Item I leave £200 to remunerate 4 chaplains daily celebrating in the Church of Campeden for ten years following …
Item I order and appoint Joan my wife John Grevell and Richard Boschell my true executors and Sir(Mgr) Roger Hatton abbot of Evesham and Sir (Mgr) William Bradley overseers of my executors  This was made at Campeden the day and year of the Lord above stated  In testimony of which I have put my seal
Proved 8 October at Lambeth before the Archbishop; administration granted to John Grevell, and on 9 Oct a commission was issued to William Small, Rector of Lynton, Worcs. Dioc. To commit the Administration to Joan the Widow, and Richard Boschell, Executors.

Original in Latin; transcribed and translated by Mrs Mary Paget from a copy of the document at Lambeth Palace Library, Arundel, Vol 1 Folio 183
Copied from CADHAS Queries folder No. 09076 (enquiry of 13.8.09)