You are here: Home>History>People>Women's Suffrage in Campden 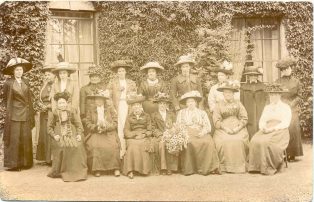 Campden Mothers Union. Josie Meadows (3rd from left) got the vote, with her mother (next right)
JesseTaylor 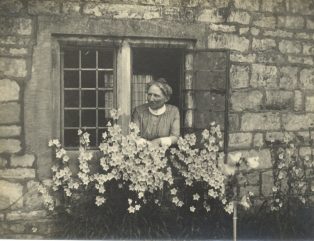 District Nurse Margaret Groom got the Vote through her occupation

Women’s suffrage was discussed in the countryside as well as in the towns….

In 1893 the Evesham Journal reported on the Liberal Party meeting in Campden at which Rev. Philip Lewis, the Baptist Minister, had raised the topic. He was well-known locally for his anti-establishment and radical views.

In the 1890s Chipping Campden was a small Cotswold market town of around 1900 inhabitants, still suffering from the agricultural depression. The solid farming community was rocked in 1902 by the arrival of the Guild of Handicraft, with families from the East End of London, bringing ideas and attitudes that challenged more traditional views.

Other meetings were held, and in 1910 there was a crowded gathering in the Town Hall to hear speakers including the writer and activist Laurence Housman, a regular visitor to the town.  Slowly, the momentum was building …

In December 1913, according to the Parish magazine…

A drawing room meeting in support of extending the franchise to women was held at Ivy House, but a week later the men met ….  ‘Woman’s place was at home.  She had no business to neglect her home to mix in politics, and vote at elections.  Moreover, she was not fitted to do so.  She was the weaker vessel, and should trust man to guide the destinies of the nation.’

More research is needed on this topic.