You are here: Home>History>Incidents and Events>A Royal Visit - 800 Years ago 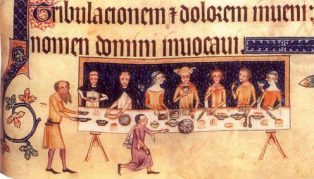 Feasting with the barons

Not long after his seal had been affixed to the document now known as Magna Carta (June 1215), King John held a meeting with some of his barons in Oxford. Then he set off for the Royal Forest of Feckenham to enjoy a little hunting.

Accompanying him was one of the most powerful and richest barons in the land – Ranulf de Blundeville, Earl of Chester.  Ranulf was Lord of the Manor of Chipping Campden, which was on the route between Oxford and Feckenham; so on Saturday 25th July, the Holy Day of St James, the royal party arrived in Campden as his guests. It is probable that they would have attended a service at the church and celebrated the occasion.

See the story below for what might have happened: