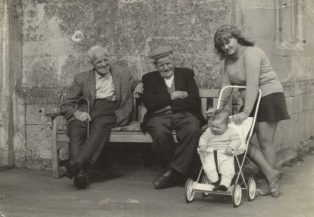 Jim Cooper (centre) with his brother George outside the almshouses 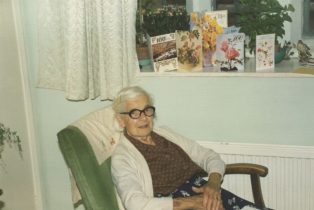 As told to Dorrie Ellis by Mr. and Mrs. Barlow Cooper

In September, 1961, James and Bertha Cooper were given the keys to No. 6, The Almshouses.  The rules then were that only Campdonians (people born in Campden) were eligible.  Nos. 1–6 were for married couples, widowers or bachelors and Nos. 7–12 were for widows or spinsters.  Each house had a large bedroom upstairs and a living room below, with a small extension built on the back.  The extension was the latest modernisation at that time – half had a flush toilet, doing away with the ‘privies’ in the garden, and a shallow stone sink with a cold water tap above, plus space for a gas cooker.  Water was laid on so the communal tap at the front of the building was made obsolete.  Electricity was installed, consisting of one light in each of the three rooms and one power point in the living room  –  the gas brackets were still in place.

A previous occupant of No. 6 had partitioned a six foot square area at the rear of the living room to make a walk-in larder. There was a shelf with a cold slab and a small window for light.  The food ‘safe’ was under the shelf – it was the usual small cupboard with a wire gauze insert at the front where meat and bacon could be stored.  Each house had an open fire with a small oven over the top – “useless for cooking but my in-laws kept their fire lighting wood in there to dry”.

In the bedrooms each had a bath with a table-top lid  –  only cold water on tap.  Nos. 3 and 10, which were the smallest in size, had their baths on a small landing halfway up their stairs.

Nos. 1 and 2, 4 and 5, 8 and 9 and 11 and 12 had shared stairs to their bedrooms – they were straight flight of steps with the two bedroom doors facing each other at the top.  Nos. 3 and 10 had their own stairs with a small landing.  Nos. 6 and 7 had their own stairs too but a turn at the bottom, then straight with a turn at the top into the bedroom.

Nos. 1, 2, 11 and 12 had their own chimneys.  Nos. 3 and 4, 5 and 6, 7 and 8, 9 and 10 had back to back fire grates and so shared chimneys.  When chimneys needed sweeping it was advisable to co-operate with one’s neighbour as soot would fall down into both grates!!   One memorable occasion was when Mr. and Mrs. Greening (who originally kept a photography shop in the High Street) lived at No. 5.  Most of their furniture was stored in the bedroom and they had a bed downstairs.  Mrs. Greening spent most of her time in bed.  When Mr. Jack Brace came to sweep the two chimneys of 5 and 6, he swept No. 5 at the side of the bed with Mrs. Greening an interested spectator!!

The tenants lived rent free, paid for gas and electricity, and were given a small amount of coal towards Christmas courtesy of the original charitable endowment of the founder, Sir Baptist Hicks.

My father-in-law’s brother and his wife lived at No. 3 (George and Gladys Cooper).  When George died his widow had to move to the women’s end as soon as there was a vacancy and she eventually moved to No.11.  It was the last time, to my knowledge, that this was carried out.

Nos. 1 and 2 had front doors and coal cupboards in the porch as did Nos. 11 and 12 and all had back doors too.  The floors in the living rooms were blue slabs and the bedrooms had old wooden floor boards.  Both rooms were covered in lino and pegged rugs were used on the concreted floor of the kitchen.

Some time in the mid-sixties the fireplaces were removed and night-burning stoves with tile surrounds and hearths were fitted.  These were a welcome improvement as they could be banked up with slack coal and kept in all night.  In the mid 60s we bought a larger fridge and put our smaller one in the ‘pantry’ at No. 6.  We drilled a hole through the partition and passed the cable through to an adaptor on the one power point.  This was a ‘godsend’ for keeping the milk fresh.  The ‘safe’ was dispensed with as the perishables could now be kept in the fridge.

Each  house had a patch of garden at the rear – “my mother-in-law took over the garden, growing their own vegetables.  She carried on until she was 100  years old.  The plots at the front were very well kept.”  Mr. Dick Smith took over their maintenance and has made a special feature of the front view of the building and a pleasure for all to see.

In 1961, my in-laws were on holiday with the Golden Age Club, so my husband and I cleared and dug all the garden at No. 6 ready for their return – we discovered that the soil was more soot than anything else!!  Later most of the gardens were grassed over and made communal.

Transformation of the Almshouses 1969-74.

In 1969, Grove Bros., longstanding builders of Campden, began the extensive alterations to the Almshouses.  Houses Nos. 1 – 5 were vacated, some residents lodging with relatives.  George Brotheridge and his wife moved into the right hand Lodge Gate by the Church – a very cold and cramped stay.

The alterations were as follows: The front, back and fireplace walls were kept but the stair walls were rebuilt.  A wonderful job was done, each house getting a new straight stairway in oak.  The large bedroom was divided to make a self-contained bathroom with bath, toilet and wash-basin.  An airing cupboard with hot water tank and immersion heater completed the bedrooms.  Central heating was installed, eventually linking all twelve premises with an oil-fired system controlled by a unit at the end of the gardens.  This was later changed to gas.  Each had a gas fire in the living room.

A larger extension was built on to the rear of each house, consisting of a small porch, downstairs toilet and kitchen with built-in cupboards at the end, a sink unit and small wall-hung refrigerator over the draining board. There was room for a cooker on the opposite wall and small working surface.  The kitchen and living room were fitted with vinyl floor tiles.

A set of stairs were made to go inside the end porch to reach the upper floor.  The kitchens for the two flats were put where the dual stairs had been.  The six porches at the front of the building are the front entrances to 3 and 4, 5 and 6, 7 and 8, 9 and 10 with new oak doors.  The outside half-doors are the original ones with security fasteners.

The original mullion windows were retained on the front but new ones put to the new kitchen extension.  All interior doors were replaced by white painted ones.  A communal T.V. aerial was installed for individual T.V. sockets with free licenses.

Unfortunately my father-in-law died in July, 1971, before enjoying these benefits.  His wife, Bertha, moved into No. 5 in 1972 and gradually with various moves, all the work was completed on the whole row and were officially reopened by the Earl of Gainsborough in September, 1974.

From this time on there was a charge for rent and heating and a live-in warden was appointed with an alarm system to each house.  The “men/women” divide was abolished – George and Sarah Bickley were the last married couple to live in No. 4.

In the early eighties there were several almshouses vacant with no “locals” interested as the estate at Badgers Field had been built and drew more applicants.  Consequently almshouses were let to “outsiders” without Campden folk realising their advantages!!

George Brotheridge became the first Warden – in charge of the Boiler house and on call to the alarm bells.  He soon resigned as there were mainly female residents and Rose Clifton was appointed and moved into No. 1 flat (her mother was a former resident).  At her death in 1984,  Pat Hands took over the post of Warden and lived at No. 4.  until 1991.  Mrs. Joan Keylock has been Warden since 1998 and lives in No.12 flat.

The water tap at the centre of the front retaining wall is the original supply installed by the patron at the time of building.  Water was piped from the Conduit House on Westington Hill to supply the Court House in the mid-1600s.

Mrs. Cooper lived in the Almshouses for 28 years and on her 100th birthday, the bellringers rang a special peal at the Church and then came to have a special drink with her with a presentation bunch of flowers from the Town Council and a photo in the Journal.  She died at the age of 104 in a local nursing home.