In February and March 2011 a group of CADHAS volunteers took the opportunity (with appropriate permissions) to carry out a small archaeological dig in an area of the Almshouses gardens where some work was due to take place.

The dig was requested by the Sir Baptist Hicks Almshouses Trust, according to a written scheme of investigation agreed by Gloucestershire County Council Archaeology Service. The archaeological evaluation comprised one ‘L’ shaped trench, excavated within the enclosed garden, which now rises to around a metre above the footpath due to the natural rubbish accrued over the past 400 years.

The dig was planned and supervised by a professional archaeologist, Martin Cook, BA MIfA, to ensure that it was carried out in accordance with professional standards. The digging team comprised eighteen CADHAS members, two of whom had some earlier amateur digging experience elsewhere, with involvement from other members of the local community.  Martin trained everyone in present-day archaeological techniques and closely supervised the actual excavation, recording and the compilation of the report.

Documentary research was done by the volunteers before and after the excavation, using resources from the CADHAS Archives, Gloucestershire Archives and the Gloucestershire Historic Environment Record. This provided some interesting ancillary information, such as background information on local pipemakers, including the will of one John Days, whose family was then traced through the parish registers.

Finds analysis was supplied by Laura Griffin, BA AlfA.  The evaluation determined that a considerable depth of well-stratified archaeological deposits survived in the gardens, dating from the late 17th century to the present day. A very considerable collection of pottery and other finds was recovered. Butchered bones produced evidence of part of the diet of the residents during the last three hundred years or so.

Talks were given to the Chipping Campden School History Club before and after the excavation and local Cubs and Scouts came on a Saturday to view the site and help with the washing of some of the potsherds and other artefacts. They were shown how to do the washing and identification of the finds and enjoyed measuring the pieces of pottery to try to establish their original size. The site was open to visitors and the residents of the Almshouses watched progress with great interest, adding their own thoughts about life there in the past.

The final results, including finds, plans, photographs and explanatory material were firstly displayed at an afternoon party to thank the volunteers and Almshouse residents for their participation. The displays were then put on for children from one of the primary schools; they enjoyed handling some of the pipes, pottery and bones, the latter, perhaps inevitably, being identified as those from dinosaurs! They went away determined to become archaeologists.

The dig and associated research has helped to resolve certain questions relating to the building of the Almshouses in the early 1600s by Sir Baptist Hicks, and provided evidence as to the lives of the residents over the last 400 years from the household waste that had been spread over the garden. Inevitably it has raised other questions demanding further research which is now an ongoing project.

All in all this project may have made only a small contribution to the understanding of life in the Almshouses over the centuries but it has led to a far larger and wider comprehension of what archaeology involves, contributing to our knowledge of the past both for those who took an active part and for the members of the local community who followed the progress of the excavation.

The final report has been approved by Gloucestershire Archaeology Service.  We are very grateful to Martin Cook and Laura Griffin for their time and expertise.  Martin and Laura’s full reports are available in the CCHS Archive Room. 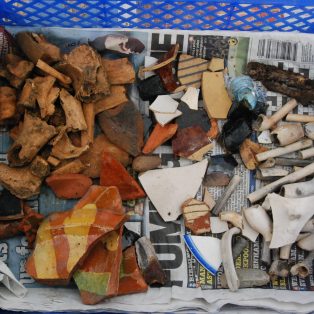 Some of the shards of ceramics found 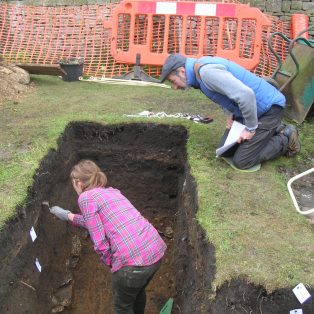 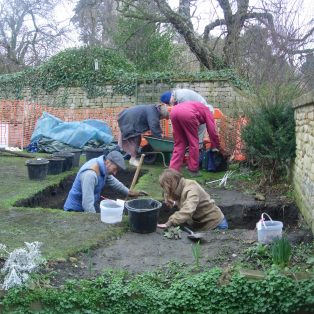 Nearly at the bottom of the trench! 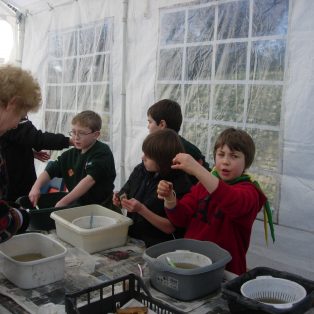 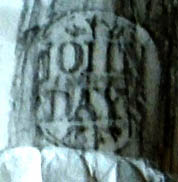 Rubbing from the stem of a clay pipe clearly identifies the maker, John Days 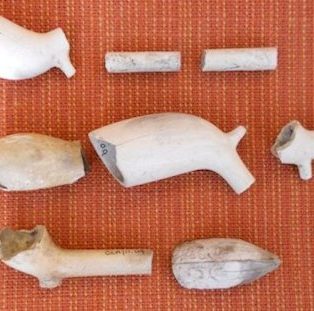 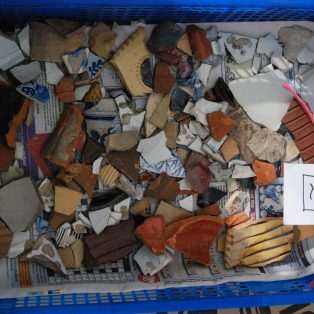