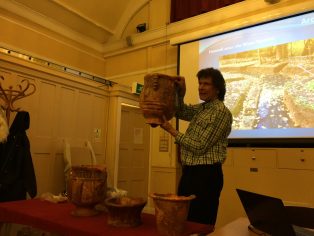 Stephen Wass displaying some of the pots found at Hanwell 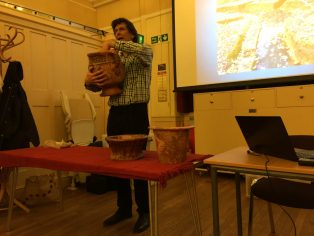 Stephen Wass explaining how the pots were put together again 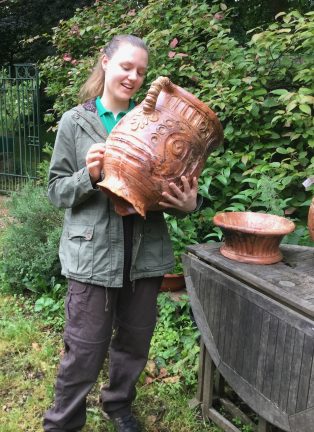 Pot discovered at Hanwell and restored

The talk to the our History Society on Thursday 20th February 2020 was a most enthralling account of Stephen Wass’s detective work in searching for the ‘House of Diversion’ mentioned in Richard Plock’s 17th century book Natural History of Oxfordshire and his excavations at Hanwell Castle, Oxfordshire, now a private estate near Banbury.

The house was owned by the Cope family, one member being Walter Cope (c.1553 – 1614) who had built Cope Castle in Kensington, London and was neighbour and contemporary of Campden’s Sir Baptist Hicks, who had his London ‘Campden House’ in the same area.

A later Sir Anthony Cope (1632-1674), was responsible for the building of an extraordinary garden at Hanwell Castle. He had studied at Wadham College in Oxford in 1649, which at the time was a centre for advanced thinkers and at Hanwell Castle he continued this meeting of great minds and people of the day;  Thomas Baltzar, (1630-63) the King’s musician and virtuosic violinist, wrote music at Hanwell; both James 1st and Charles 1st visited there too.  However all Anthony’s children died before him;  he had fallen out with and disinherited his brother, John, who had married ‘beneath him’ a lodging-house keeper from Dunkirk;  and when Anthony Cope died in 1675, although his wife survived him by a further 40 years, she was insane and locked up, so, all work on the garden stopped, it fell into decay and in places was destroyed.

The archaeological digs undertaken by volunteers between 2011 and 2020 have revealed extensive water gardens and parterre, lakes, a natural dam, a mill, a cascade with sluice and earthworks to control the water, walled terraces, a temple of Flora and an octagonal island with an unusual bath feature and walled moat, in which were excavated the most amazing finds.  Thirty terracotta pots and urns seem to have been pushed off the parapet of the walls into the moat, to be smashed as they fell, but left undisturbed thereafter, so the team were able to recover the pieces and have managed to piece some together.  Stephen brought 4 sample of these finds to show us, including the foot of a pot with the date 1664 and an unbroken glass wine bottle.  Other finds included many clay pipes dated to 1670s, a blue patterned broken plate, clay roof tiles, a fine cut coping stone and carved base of a fountain.

Stephen Wass is an independent consultant on historic gardens and undertaking his doctoral research on Hanwell with the Department of Continuing Education, Oxford.