Smallpox, Chickenpox, or Something Else? 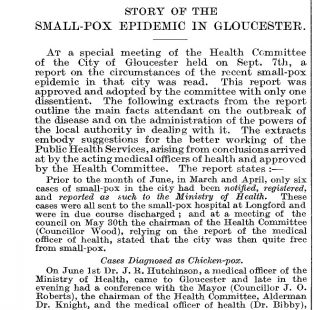 Clearly many people were interested and intrigued by the title, and a good audience gathered at the CCHS October meeting to hear Dr. Toby Thacker, formerly of Cardiff University, give a carefully researched and interesting talk.

In the 19th century smallpox proved to be a deadly disease, but in 1872 Edward Jenner had introduced vaccination and in due course, with some exceptions, this had become compulsory and, apparently, very effective. 85% of those eligible accepted vaccination in 1872, but by 1920 this had dropped to 39.5%.  Children under 10 were the main victims of the disease.

In the 1920s the anti-vaccination and anti-vivisection group led by the Mayor, John Roberts, the Medical Officer of Health, Dr. James Bishop and the influential G.P., Dr. Walter Hadwen, opposed compulsory treatment.  It was claimed that the outbreaks in 1921 were not smallpox but a milder disease known as milkpox or alastrim.  Even if this were correct there were fears that it could revert to smallpox and following the Great War the Government wanted everyone to be vaccinated.

Poor housing in Gloucester was a known problem and in1923 notices were posted up calling for vaccination. Even so it was thought dozens of cases of the disease went unreported and the Ministry in London required emergency measures. A larger hospital was needed and the aerodrome buildings at Brockworth were converted for this purpose. Dr. Hadwen issued a counterblast alleging the disease was merely chickenpox and the Ministry was mistaken. This point of view was supported by the Trades Unions and the Labour Party.  Two hundred died in Brockworth.

Sensationally on 11th July 1923 the burial of a baby at Gloucester cemetery was interrupted by Hadwen demanding to see the body to prove the child had not died from smallpox, but the Superintendent refused him. The epidemic had waned by August 1923 and the surviving patients at Brockworth seemed to have enjoyed their stay, and the break from work!  Many people would not accept that vaccination had helped and suggested they had had chickenpox or alastrim.  The Ministry insisted it had been smallpox and that measures to prevent were still necessary throughout the country.

It was not until 1948 that compulsory vaccination against smallpox ended when the Ministry of Health accepted that there were two strains of the disease, Variola Major and Variola Minor.  Thus ended a fascinating evening of medical detection and investigation.