The Boys’ Brigade was founded 1883 in Glasgow by William Alexander Smith. Its aims were the advancement of Christ’s Kingdom among boys and the promotion of habits of Reverence, Discipline, Self-Respect, and all that tends towards a true Christian Manliness (the word Obedience was added some 10 years later).

The Boys’ Brigade does not concern itself about recruiting for Her Majesty’s Services, but it holds that, were all our forces largely leavened by men of the types aimed at in the training of the Boys, this country would be indebted to The Brigade.

The use of rifles for drill, although they were dummies, caused deep offence to many who were against the military style. 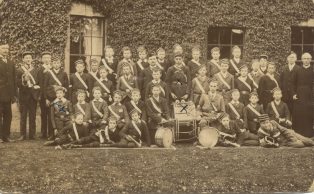 Campden Boys Brigade at the Vicarage

Jim Pyment and H G Ellis had a shared interest in the well-being of boys and in 1909 they formed Campden Boys’ Brigade.

Jim Pyment was a cabinet maker who, with his family, moved to Chipping Campden with the Guild in 1902, where he immediately immersed himself in local life. He re-formed the Town Band, was involved in Campden’s care of Belgian refugees in WWI, and later took a leading role in a variety of social and recreational activities.

Harry George (H G) Ellis was the town basketmaker with an interest in helping young people, in Christian ways, and in military life. He was a member of ‘K Company’ Volunteers, being presented with his long service testimonial in 1901. HG was an active member of the community, serving on the Town Council and many committees. 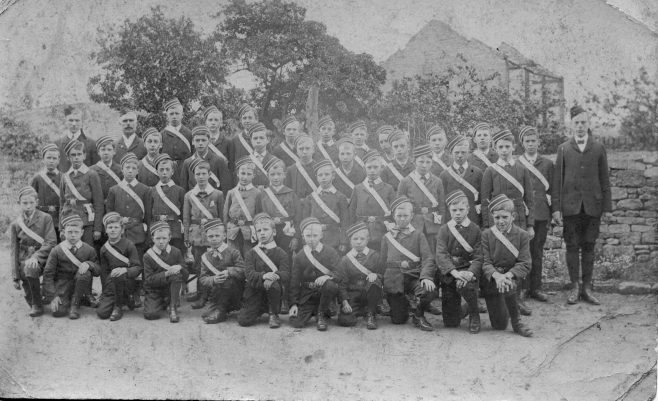 On Monday evening the Campden Company of the Boys’ Brigade, recently formed by Messrs. H G Ellis and J W Pyment, forty strong and two officers, wore their uniform for the first time, and it being Empire Day paraded the town under the command of Capt. H. Pyment, and after some instructive drill sang the National Anthem near the Chestnut Tree and again in the Square. Before dismissal Sergt-Inst. H G Ellis, in addressing the boys, reminded them of their motto, ‘Truth, Honour and Self-reliance’, and said he hoped they would always adhere to these principles, and never disgrace their uniform, either now or should they wear one when they were older. 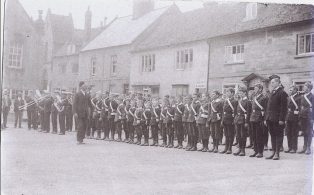 On Monday evening the Campden Company of the Boys’ Brigade paraded for the first time this season in the Market Square under Capt. F. T. Ellison. They were then marched to the Vicarage and there a very pleasing little ceremony took place in the form of a presentation to the Vicar, as Chaplain of the Company (the Rev. O. F. Jacson) of a large portrait of himself in an oak frame, together with a handsome illuminated address.

[As part of the Vicar’s review of the previous year] The Campden Company of the Boys’ Brigade under the command of Capt. T Ellison, who is loyally supported by Instructor H. Ellis, and Lieut. N. Izod, is going stronger than ever and is bringing to bear upon the lads a strong influence for good. It is most encouraging to hear from some of our old lads, who have left the parish, of the help that the lesson of discipline which was instilled into them as members of the Brigade, has been to them.

[part of the Vicar’s report] Boys’ Brigade This is by no means the least important section of the Church’s work in the parish. It has conclusively proved itself of great power for good amongst the lads. Our energetic officers never miss an opportunity of instilling into the members of our Company the spirit of discipline with the idea of helping each lad to become a faithful soldier of Christ, and a useful citizen.

The adult members of the Choir and also the Campden Company of the Boys’ Brigade are looking forward to a long day’s trip to Portsmouth on Thursday, August 7th, by the G.W.R. Excursion, leaving Campden at 6.10 a.m., and returning home again 1 a.m. on Friday. 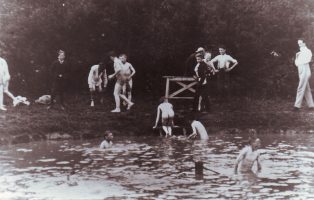 Boys Brigade having fun at the Bathing Lake

The Campden Company of the Boys’ Brigade. This is still under the command of Captain T. Ellison, who is loyally supported by Instructor H. Ellis and Lieut. N. Izod. During the summer the drills were well attended, but since the outing to Portsmouth, we regret to say, there has been signs of considerable slackness amongst the lads, and the attendance at their Bible Class has been anything but good. We trust that all concerned will do their utmost to remedy this defect. This work amongst the lads is capable of rendering much help in the building up a strong characters, and should receive the hearty assistance of all.

For some time past the question of converting our Company of the Boys’ Brigade into a Company of the Church Lads’ Brigade has been under consideration, and it has been decided that the time has now arrived when the change should take place.

The Officers of the Company have invited Mr. A. E. Wrigley to take command of the new Company and he has kindly consented to do so. All the Officers and lads of our present Company have expressed their willingness to transfer to the C.L.B.

Our chief reason for making the change is that by forming the C.L.B. we shall obtain stricter discipline, and be under the careful supervision of the Headquarters Staff in London. Our Company will be linked on to the Gloucester Regiment of the C.L.B., and we shall be placed under the command of Colonel Thoytes, who will at regular intervals inspect the Company.

The Great War and afterwards

In September war was declared and many who had been involved in the Boys’ Brigade enlisted. Frederick Ellison, the former Captain of the Boys’ Brigade, joined the Royal Engineers and survived the War, later active in Campden life until his death in 1957. H.G. Ellis joined the Worcestershire Regiment as a sergeant-instructor, and the boys who were old enough went far afield. As there is no list of the members it is not known how many there were. Those who signed up included: Harold Pyment, Gordon Ellis (died 1915), Michael Grove, George Plested, Tom Plested (died 1916), Gerald Howell, John Howell, John Franklin and William Payne.  Some, such as Arthur Ellis, enlisted later when they were old enough. 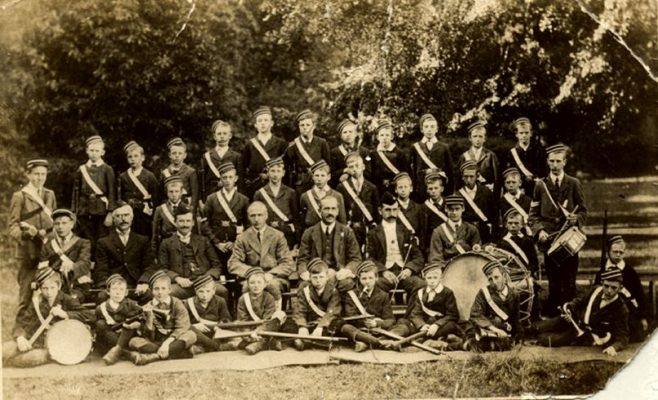 Boys Brigade with their rifles

The Campden Company of the Boys’ Brigade had a brief life, just five years, and there are intriguing hints of dissatisfaction in the news item in the Parish Magazine that announced the transfer to the Church Lads’ Brigade. Further research is needed into this later development.