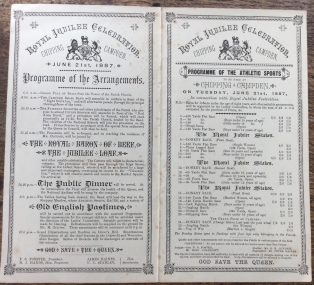 Programme of events for 1887 Jubilee

The Golden Jubilee of Queen Victoria was celebrated on 20 June 1887 and communities all over the country debated how they would mark the occasion. The Evesham Journal reported on the Campden committee’s survey of public opinion, three months before the event:

‘..they found an almost unanimous expression of feeling in favour of a parish feast to be held on Tuesday June 21st, the feast to be the first charge on the funds [donations for the event]. Should, however, a surplus remain, then opinion was in favour of some permanent memorial…’

The feast won, and the cost estimated at £43.5s.9d was just below the promised contributions amounting to £55, so there was unlikely to be anything left for a permanent monument. The proposal for a feast soon developed into a full day of activities and several committees were formed to organise different parts of the event.

The programme for the Day is held in the CCHS Archives and together with the Evesham Journal report we have a picture of the activities that brought Campden together in celebration.

The church bells were rung early in the morning and at 10.30 am the procession wended its way through the town to Cotterells Orchard, “First came the royal coat of arms and then a large flag, surmounted by a crown. Then followed the band under the leadership of Mr William Warner; the members of the Brittania, Oddfellows and Hearts of Oak friendly societies and last of all the parishioners generally.”  The ‘Baron of Beef’ and the ‘Jubilee Loaf’ joined in – were they ‘real’ or people dressed up? The feast, enjoyed by 934 adults and 493 children, was followed by a varied programme of sports, including ‘The Royal Jubilee Stakes Grand Prize of Campden’ – a donkey race in which last past the post wins! The programme also stipulates that the Donkey Races are “open to Donkeys with four legs only belonging to the Parish”. How is this to be interpreted? – no donkeys with three or five legs? The legs belong to the Parish but the rest of the animal doesn’t? Maybe they weren’t real donkeys? But it seems they were – according to the Journal the ‘last past the post’ winner, perhaps the most stubborn donkey, was Mr Blakeman’s Forest Boy. ‘A most enjoyable occasion.’