Dover's Hill and the 'Olympick' Games 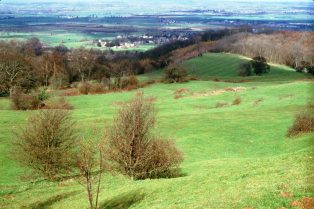 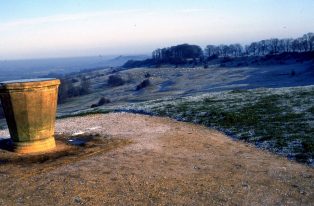 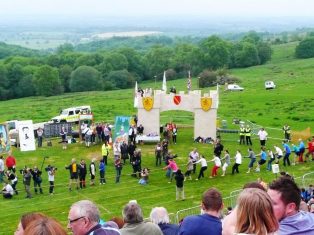 The woods below Dover’s Hill are called ‘the Lynches’ and it is thought that these were Roman vineyard terraces, lynchet meaning man-made terrace.  There is an aerial photo from the English Heritage Archive of a field below the hill called The Plain, which shows something which could be a Roman villa or hill fort.  Roman coins have been found in fields in the vicinity.  Percy Rushen’s ‘History & Antiquities of Campden’ (1911,  p.16) writes

from its picturesque situation, fertility and proximity to the Fosse way and other circumstances, it is far from unlikely that in this district many Romans were settled prior to the time before referred to & it is the opinion of many that several Roman villas graced the terraces of Dover’s Hill near the Aston highway.

There are several other locations in the area where Roman settlements have been found, eg Dorn, Ebrington’s Roman Villa ‘the Grove’ and another Roman road, Buckle St is close by.  Corinium Museum, Cirencester is the authority on these.

The later period of Dover’s Hill history relates to the Dover’s Games, also called the Cotswold Olympicks, started 1612 by the eponymous Cotswold lawyer Robert Dover.  The sports comprised rural sports – horse racing, hare coursing, wrestling, shin-kicking, tossing the hammer, fencing with cudgels, all of which would be interspersed with dancing, feasting and bouts of drinking!  The Games’ fortunes came and went several times through succeeding centuries – a casualty of war or local objections.  In the 18th century spectator numbers swelled with an influx of workers from Midland industrial towns and the itinerant navvies building the new Brunel railway at Campden.  Inevitably, ‘drunken and disorderly’ behaviour ensued, which may have contributed in large part to the Games being discontinued in 1852.  The games were revived in the 1960s and still take place annually on the Friday evening after the Spring Bank Holiday, now with various contests of skill, strength and athleticism, bands and merry-go-rounds, ending with a torchlight procession to the town square.  (See Campden Customs leaflet for more)

C.J.Bearman, in an article on the Ending of the Cotswold Games writes:

Pastureland on the slope of an escarpement rising to the top of the Cotswold plateau between CC and Vale of Evesham, was not inclosed, the land farmed under an open field system.

This open field system can be studied in a book printed by C.R.Ashbee’s Essex House Press in 1904,  The Last Records of Cotswold Community, being the Weston Subedge Field Account Book for the final 26 years of the famous Cotswold Games, 1826-52, hitherto unpublished.  This book contains a map of the open field system 1840.  The book is a collector’s item and not readily found.

It was due to Campden artist and etcher Frederick Landseer Griggs (1876-1938) that Dover’s Hill, with its natural amphitheatre and wonderful view, is available to us all to walk on today, for in 1926 he bought the hill at auction, when it was threatened with going into private hands.  He was in debt for several years after this, but eventually the money was paid off and the land was given to The National Trust.