You are here: Home>History>Jill's Jottings>Singing for pigeons causes a fight

Singing for pigeons causes a fight 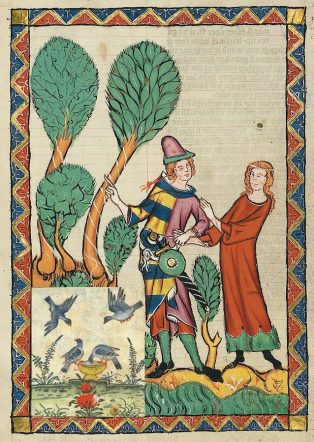 A report dated 24th August, 1274, tells a complicated story which throws a little light on some of the ways in which the people of Campden amused themselves at the time.  It seems some boys and girls were singing for pigeons.

It sounds as though they sang in turn and the best one was to be given the pigeons as a prize.  It so happened that two grooms in the service of the earl of Gloucester were in the town, collecting hay for the earl’s horses.  They stopped to watch and listen. One of the grooms seems to have taken a fancy to the singing of one of the lasses because he declared that she sang well and handed her the pigeons.  At this two of the most important men of the town, the two burgesses Nicholas Calf and Thomas le Prute said the decision was not his to make and she wasn’t to have the pigeons.  After all they’d supplied the pigeons and were supposed to be the judges of the contest.  The groom was threatened and then struck with a stick.

That wasn’t the end of it.  The rest of the earl’s men were just outside the town and when they heard what was going on – I expect the other groom ran off to fetch their help – they all dashed in.  They were armed with bows and arrows and intended to rescue the groom who’d caused all the trouble.  Well the young men of Campden and Westington weren’t having that and cheerfully laid into the invaders.  The record in the ‘Hundred Rolls’ says carefully that they ‘mingled themselves with the earl’s men and each wounded and maltreated the other.’

Then a Campden man was shot with a barbed arrow.  Now that was serious – not quite a weapon of mass destruction, but not one to be used in a petty squabble like this.  The Campden men went to the place where the earl’s men were quartered and took two hostages, demanding that the perpetrator should be handed over.  This was done and he was imprisoned but then the earl’s men came back into Campden on the rampage.  Of course the whole matter now escalated out of control.  The prisoner was freed and carried off and some rather puzzling reports of looting follow in the records.  It all ended, would you believe, with William Calf, Thomas le Prute and two other Campden burgesses being fined.