You are here: Home>History>Crime and Punishment>Execution of William Kelly for Murder

Execution of William Kelly for Murder 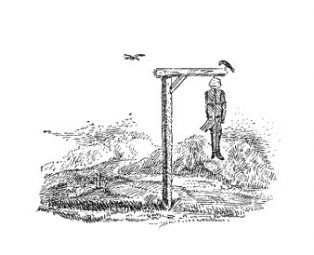 In 1772 William Keeley was found guilty of murdering Joseph Dyer near Chipping Campden. It was arranged that he would be hanged near the scene of the crime, then placed in a gibbet afterwards, where his body would be left to rot.

On Sunday, 24 May 1772, Joseph Dyer, a gardener and nurseryman, walked several miles to collect a debt. On his return to Campden he stopped at the Fish Inn on Broadway Hill.  After finishing his drink, Dyer set off for home. An hour later, he was found lying dead in the road at Campden Hill, about a quarter of a mile from his house, with his throat cut, his head badly bruised, one of his ears nearly torn off and some of his teeth beaten out. Near his body was a piece of paper which it was thought had been wrapped round his money.

A girl came forward to say that a labourer named William Keeley had passed her on the road where Dyer was found, shortly after the murder was believed to have taken place, and she had noticed that there was blood on his breeches. Keeley (also spelt in newspapers as Kealy or Kelly) was quickly arrested. He denied any involvement at first, but later admitted to attacking Dyer, saying that he and another man named Tracy had beaten him to the ground, in order to rob him. Doubting Tracy’s involvement, Keeley’s parents begged him to tell the truth, and he then admitted that the other man had nothing to do with the crime. However, as he was being escorted to Gloucester Castle to await trial, Keeley told a constable that although Tracy had not been involved, he had indeed had an accomplice, named James Warner.

On Saturday, 13 June 1772, the Oxford Journal reported:It seems that Keeley is a famous Morrice dancer, and on Sunday morning before the fact was committed, he was teaching a set of fellows to dance. Warner used to play on the tabor and pipe to the dancers. It is to be hoped the Justices will suppress such nurseries of idleness and drunkenness as morrice-dancings have generally proved.In late August, William Keeley stood trial at the Gloucestershire Assizes for the murder of Joseph Dyer. He was found guilty and sentenced to be hanged and gibbeted near the place where the murder was committed.

COUNTRY NEWS. Gloucester, Aug. 31. On Friday Afternoon was executed, and afterwards hung in Chains on a Gibbet 30 Feet high, erected for that Purpose on Campden Hill in this County, William Kelly, for the Murder of Richard Dyer, of Campden, Gardener. He persisted in denying the Fact in the most solemn Manner, calling God to witness his Innocence, till he came within Sight of the Spot where he committed the Murder. He could then hold out no longer, but confessed  that he alone committed the Murder; and declared the want of Money was the Temptation; that he overtook Dyer on the Road to Campden, walked with him some way, and as they passed along he (Kelly) picked up a Stake as it lay in the Road; that at that Instant, and not before, the Thought of murdering Dyer came into his Head, and soon afterwards, as Dyer was getting over a Stile, he knocked him down with a Stake and killed him; but when he saw Dyer lie dead on the Ground, he said his Heart would not let him search him, but he immediately ran away.Reaching the place of execution, Keeley found thousands of people waiting to watch him die.

His Father and Mother met him on the Road not far from the Place of Execution, and the Scene of their parting was very affecting. When the Executioner left him, he put a little Straw in his Hand to give the Signal by; and afterwards being told by one of the Officers that when he was ready he was to drop that Straw, he with great Eagerness answered, “Do ye think God Almighty is ready for me?” and soon after gave the Signal, and was launched into Eternity.  He was about 22, and has left a Wife and Children behind.

After he was dead, Keeley’s body was hung in chains on a thirty-foot high gibbet, to act as a dreadful reminder of the awful penalty for committing murder and, perhaps, to warn the locals of the perils of taking up Morris dancing.