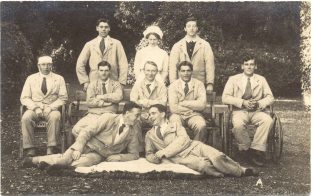 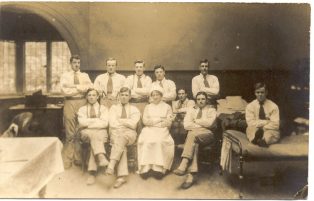 (Elizabeth) Mary Dee was the daughter of a well-known local farming family, born in 1880 to Henry and Martha Dee, of Longlands Farm, Mickleton. She had nine brothers and sisters, who gradually left the family home.

Mary cannot be found the 1901 census but her nieces understood that she was a teacher in the Selly Oak area of Birmingham. Certainly by 1911 Mary was living back at home, said to be teaching at Paxford school.

When Norton Hall was opened in November 1914, Mary started work there as an unpaid VAD (Voluntary Aid Detachment), continuing to live at home. She was an unqualified nursing assistant, but doubtless learned some basic skills during her time there, staying there until the hospital closed down.

She was clearly well-regarded by the soldiers, who kept in touch with her and sent postcards. Some are addressed to ‘Sister’ Mary Dee – it was an issue of some irritation to trained nurses in the hospitals at home and abroad that the soldiers did not appreciate the differences in rank and qualification and indiscriminately addressed all female staff as Sister.

After the War, Mary went back to teaching, this time in Blockley, living there and returning to the family farm at weekends. She died in 1977.

Chipping Campden History Society is grateful to Miss Mary Dee’s nieces for lending us her postcard album and other documents, which have helped so much in telling the story of Norton Hall.