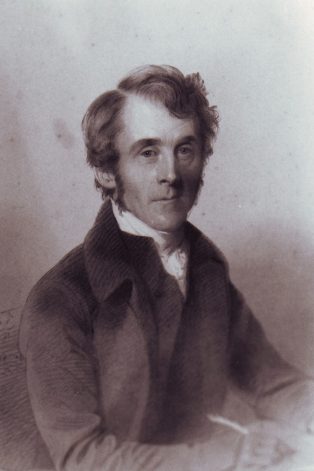 Probably the longest serving Vicar of St James’ church was Charles Edward Kennaway. He was 32 years of age on 12th May, 1832 when he took up the benefice and retired forty years later in 1872.

His predecessor was Leland Noel and the patron who presented him was Charles Noel, Lord Barham. These were not his only connections with the Noel family for his first wife was Emma Noel.  In an obituary notice held in the church Muniment Room, she is described as ‘the daughter of the Honourable and Reverend Gerrard Noel’.

Emma Kennaway suffered from poor health and so after only a few years Charles Kennaway undertook duty at Christchurch, Cheltenham, so that she could be near to her doctor and medical care. Then, for the sake of her health, he moved on to Trinity Chapel, Brighton, until she died in 1843.  During his absences, curates held the services and dealt with parish matters in Chipping Campden. 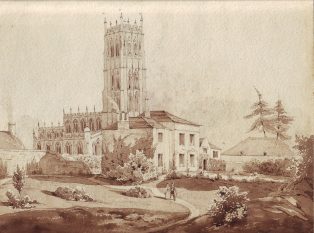 Returning then to Campden he took up full parish duties once again. A new east window was installed in Emma’s memory – this is now the north chancel window. In 1845 he married again, Olivia Way becoming the mother of his children.  Amongst the works that he accomplished are the six Vicarage Cottages in Leasbourne, on which are his family coat of arms and motto.

Not all of the records of his period have survived. He began a manuscript record, ‘The Vicar’s Book’ which he hoped might be of assistance to his successors, in which he recorded all sorts of information. At least two subsequent incumbents seem to have carried on making entries. Alas, many years after his death it was discarded and used as a scrapbook into which were pasted newspaper cuttings and similar items.  Eventually it was taken away from Campden.  At about the time that the Muniment Room was set up, someone discovered its whereabouts and managed to get permission to copy the few lines of writing that remained legible.

Tactful answers to the Bishop on the state of the parish

These include notes of a return to the Bishop which seems to be tactful answers to questions on the state of the parish.

If only we knew where this document was now, modern conservation methods might enable the complete text to be discerned.  What further secrets of Campden’s past might be revealed!  Do you know where the book is?  Let us know!