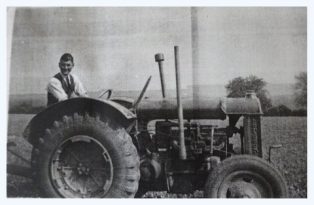 About 1933 the local land agent behind the town hall approached Father and told him of a farm becoming available to rent saying ”you’ve got these three sons why don’t you consider it?”

and that was how we came to rent the 125 acres of land on Campden House Estate opposite Cotstone Quarry known as Old Barn Farm or Tilborough. We always referred to this land as ‘on the hill’! My two older brothers Lewis and Dudley had obtained jobs in Coventry after leaving the grammar school thus leaving George, Sidney and myself at home to help Father. It was then that my father formed a business partnership with us three younger sons namely H.L.Wheatcroft and Sons.

These were the days before combine harvesters and the sheaves of corn from the harvest of the previous tenant Mr Haines, were still stacked in ricks close to the farm buildings. I can remember the threshing machine being brought alongside the ricks and the sheaves being removed, untied and put through the thresher. Great care had to be taken so that the string didn’t get mixed up with the straw as barley straw would be used for animal feed. As the sheaves were removed they were stacked against farm gates taken from their posts and placed easel-shape inside to aerate and dry the corn and prevent it overheating and catching fire.

Another local vegetable grower by the name of Reg Smith knocked on our front door. Complimenting Father on taking the land he then proceeded to tell us that a contractor friend of his in the Vale of Evesham had been unable to continue operating due to financial problems. To help this friend Reg had stepped in and bought all his farming equipment ie tools, implements and a tractor, but he didn’t really need them. Father didn’t hesitate, but quickly said ”put another £10 on for yourself and I will have the lot” And so we became the proud owners of not just a tractor, but a trailer, chain harrows, plough, scuffle and saw bench, all for £120. I still remember the registration number of that very first tractor BWP 664. It was a Standard Fordson and ran on a mix of petrol and paraffin. I very quickly learnt how to drive it and how the engine worked, although I did need to take a road test much later on. Tractors were still few, but I remember someone had a Lanz Bulldog from Germany, a single cylinder diesel, that sounded a loud ‘thump, thump, thump’ even from a distance. Then slowly tractors took over from the horses and the very last horse and cart in Campden was one of the coal merchants Ted Nobes’.

In 1937 Father was able to erect a large greenhouse at the top of the orchard.  Father could now grow larger crops of tomatoes, and for some reason these always had a unique flavour, whatever variety he planted. This greenhouse greatly enlarged the space for growing the plants for sale and for his land at Russell’s and ‘on the hill’. The land at Old Barn Farm was very stony, but very fertile and he now grew crops of peas, sprouts and potatoes, all of which had to be harvested by hand. Wheat and barley were included in the crop rotation. Pea crops were sold to Batchelors.  Pea picking began at 5.30am and as many as 8-900 hundred nets were picked each day.

A young 13 or 14 year old lad named Jim Court came to help us on the farm. Other help came seasonally in the form of local ladies for potato-picking up and one or two ‘men of the road’ and ‘travellers’ for pea-picking. One of the men lived under a huge overhanging rock near one of the quarries while he worked for us. We couldn’t have harvested these crops without this extra help.