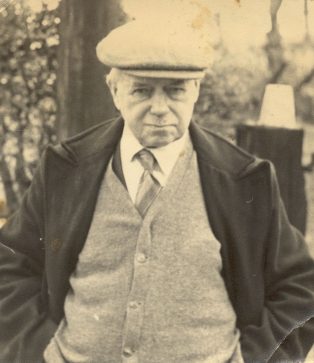 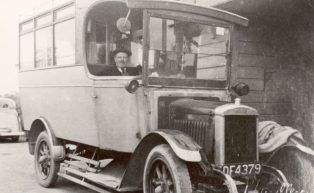 Born in Herefordshire in 1883, George was one of ten children of parents James, a waggoner and his wife Mary. George married Mary Maria Keyte in 1907 at Saint James’s Church, Chipping Campden, subsequently moving to Abertillery, Monmouthshire.

George served in India in WWI and on his return bought a waggon and two horses that had seen fighting in France. It was with these that he commenced his long career transporting goods from Campden station. The next step in his haulage career was success in his application to the Great Western Railway for the franchise, not only to carry goods, but also passengers to and from the station.

Eventually the horses were sold and George, accompanied by his brother-in-law Percy Jones, travelled to the Morris car manufacturers in Cowley to meet a designer.  Together they made drawings for the bus that was duly built and that Campdonians thereafter knew as the Flying Greenhouse.  George, accompanied and instructed by Percy, then drove round Catbrook and Westington, and was pronounced able to drive!  From then on, George was known as ‘Bussy’ Haysum.

The bus plied its trade for twenty-three years between the town and railway station and though its engine was twice renewed, its original appearance remained the same.  As the bus laboured up Station Bank, young lads liked to hang on the back of it, causing a puzzled George to get out in order to discover the cause of its demise.  Innocently, the boys would offer to push the bus and for their trouble, they earned themselves free rides into Campden!  He also owned a Ford truck that he kept with the bus in a double garage in Sheep Street.  In the truck, he used to fetch huge crates of china for Elsley’s general store.

George was under contract to carry fresh fish from Campden station to Ellis’s fishmonger’s shop in the High Street. It seems that he found this errand very distasteful due to the smell of fish lingering in his bus for days afterwards!

George’s bus was a cross between a hearse and a large van and though some American soldiers had wanted to buy it during the Second World War and take it back to America, it finished service in 1947 and ended up at a Shipston scrap dealer’s yard.  With the decline in carrying goods by rail, George bought a Hillman Minx, which he used as a taxi until he retired in the early 1960s.

George was short in stature and sported a moustache that was not unlike Adolf Hitler’s!  His uniform was a grey overall coat and a flat tweed cap. When he died in 1963 the Mayor, Les Brodie, proposed that a new housing estate built behind George’s old home, High House, in Sheep Street, was fittingly named Haysum’s Close.