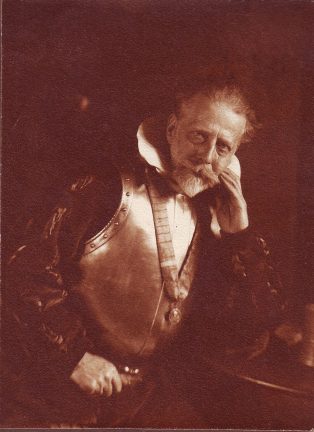 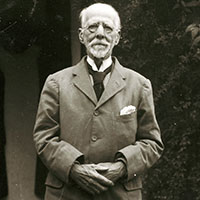 Wentworth Huyshe was born on 13 April 1847, the son of Alfred Huyshe.  In overlapping phases he was journalist, historian, translator, designer, composer and actor, but  being a writer suited him best.  He had a passion for all things mediaeval.

Huyshe’s main occupation was journalism and on it depended, for a short period at least, a family of thirteen.  He began writing for newspapers in about 1876 and in 1919, at the end of 72, he was still penning occasional articles for the Daily Graphic.

A feature of his life is the sudden change of direction, the volte face, the break with the orthodox and the familiar, the restless pursuit of the new.  In early married life he moved house many times, he bounced from one employer to another and back again, he divorced and remarried, converted to Catholicism, plunged into a succession of disciplines and skills and enthusiasms.  Personal relationships were often threatened as a consequence.

In 1887 he married Hester Hart, and became stepfather to Hester’s 3 surviving sons – Will (carver at the Guild of Handicraft and working partner with Alec Miller’s studio in Calf Lane), Fred (sea captain and collector) and George (silversmith at the  Guild of Handicraft) – and had 8 further children with her.  The family eventually settled in Hitchin, Herts in 1897, but in 1906 followed Huyshe’s stepson George – then working with C.R. Ashbee and the Guild of Handicraft – to Chipping Campden.  Huyshe was 59 and still working for the Daily Graphic.  In the 1920’s American Ben Chandler kindly bought the freehold of Pike House from the Gainsborough estate and allowed the Huyshes to live there for the rest of their lives.

Hester died on the 25th April, 1934 and Wentworth died eight months later  on Dec 2nd 1934 in Pike House.  He left the contents of the house, excluding portraits, to Fred Hart.  Their grave is in St Catherine’s Catholic Churchyard, the stone carved by Alec Miller.

His was an erratic life, and in some respects a sad one.  He was a passionate man – for Hester, for collecting, for all his pursuits and interests.  He had great energy and considerable intellect.  He was a good shot and a good rider.  He was brave, sometimes to the point of foolhardiness.  He could be waspish; he liked pretty women; a few people thought him snobbish.  Yet he was also liked, loved and respected – sometimes ruefully – in all the worlds in which he moved, even by those who were bemused or baffled by his heterogeneous achievements and eccentricities.  He was a restless soul.

Much of this information is taken from the Introduction to The Various Lives of Wentworth Huyshe.

To read more about Wentworth Huyshe, buy the book The Various Lives of Wentworth Huyshe by T F G Jones, published by CADHAS.  Go to the Publications page and order online.