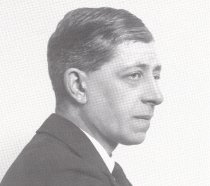 Frederick Landseer Maur Griggs (1876-1938), etcher, draughtsman and illustrator, came to Campden in 1903, and moved to a house on the High Street in 1906, which he re-named Dover’s House, living there for nearly thirty years. In 1922 he set up the Dover’s House Printing Press.

Robert Dover’s “dear old hill” was a special place for Griggs, where he walked and thought and where he proposed to Nina Blanche Muir, who he married on 9th January 1922.  Three of their five children were born in Dover’s House, John Ceolfid, 1922; Marjery, 1923 and Millicent, 1926.  Griggs saved Dover’s Hill for posterity in 1926.

In his time at Dover’s House Griggs renovated Miles House in 1917, Westcote House in 1926, Commercial House (Post Office) and the Old Kings Arms in 1929.  He designed Campden’s War Memorial in 1919 and several of the wrought iron High Street shop signs.

In 1925 he founded the Campden Society to protect the town’s heritage and saved Dover’s Hill for Campden in 1926. It is now in the ownership of The National Trust.

Griggs had the idea of building his own Arts & Crafts house after seeing Woodchester & Rodmarton in the early 1920s. He started in 1926 by buying the Stanley farmhouse (now Stamford House) in Leysbourne with orchard & fields behind. Work on his new house began in 1927 and on October 2nd 1930 the family left Dover’s House for the still unfinished Dover’s Court.