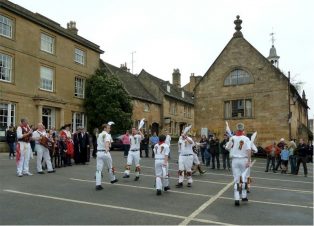 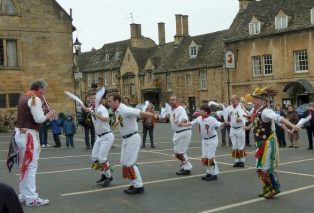 Many towns and villages – and countries – have their special May Day celebrations.  Chipping Campden celebrates the coming of Spring and blossomtime with maypole and Morris dancing in the Square early in the morning.

The ruins of Campden House provide the evidence for what must have been the most terrible and frightening event of the Civil War. The Royalist cause was in difficulties and the Parliamentarian troops now held many parts of the land that had supported the king in the early days of the war. King Charles decided to assemble a great army and begin a new campaign against the Roundheads. He marched west from his new capital, Oxford, calling in the garrisons of various strong-points as he passed.

One of these was based in Campden. Colonel Henry Bard had held the district for the king for several months with some 400 soldiers. He and his officers lived in Campden House and the rest were probably billeted in the town. Prince Rupert sent orders telling them where and when to join the royal army and instructed them what must be done to prevent Campden House falling into enemy hands. They all knew that the Parliamentary forces in Warwick and Gloucester would like nothing better than to get their hands on the house to incorporate it into their own system of occupied places.

On 8th May, the day after he left Oxford the king reached Stow-on-the-Wold and stayed there for the night. The next day the march continued towards Evesham. So it was on 9th May that the army travelled along the road passing the place at the top of Westington Hill where some years later Izod would erect his signpost. The soldiers from Campden had left their billets and set off up the hill to join the straggling column.

Campden breathed a sigh of relief – too soon, for worse was to come. Sir Henry Slingsby, one of the officers with Bard, later recorded in his Memoirs,

‘Before we started from Campden, the Prince had given command to Colonel Bard, Governor of Campden, to march along with his regiment and, lest the enemy should make use of the House for Garrison when he had left it, being so near Evesham, the Prince likewise commanded it to be burnt, which I set on a light fire, before we marched off.’

Later writers, including the Earl of Clarendon, blamed Bard for ‘wantonly’ burning the house down but it is now clear that it was done under orders from Prince Rupert, Commander of the King’s forces. Even Colonel Slingsby was not happy at having to do it for he commented that he had been told by ‘Lord Cambden’ (sic) that the house and furniture had cost £33,000.

This was not the end, for soldiers from Warwick arrived to take the town but ran into an ambush left by Bard. They were too late to save the house which is said to have burned all that night, giving light to the rearguard of the king’s army marching along the road above Campden.

Much of the reusable stone has been taken away and some say was used to provide the decorated eighteenth century frontages to many of the High Street houses. The remaining ruins, changed to red in the interior, show where wooden panelling burned hotly.