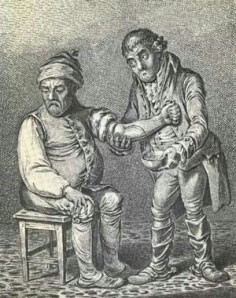 a barber-surgeon bleeding a patient 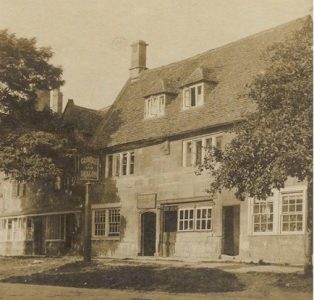 The soldiers forming the Royalist garrison in Old Campden House were delighted by the delivery of ‘three score snaphance muskets’.  These were a new and improved weapon, for they did not need to have a matchcord permanently lit as did the matchlock muskets used in pitched battles.

A soldier died and was laid to rest in Campden churchyard, whether through wounds or illness is not known.

Leases of property can tell us much about times long ago but sometimes they need a bit of unravelling. On 10th February 1674 John Allen received a lease for 99 years or for the lives of John, Richard and Elizabeth Allen – probably himself, his son and either his wife or daughter.

He was a ‘barber chirugeon’ – in other words a barber-surgeon.  At that time physicians did not carry out surgery. This was left to men more experienced in the use of cutting tools and initially these had been barbers as well. This is why, even today, a physician is addressed as ‘Doctor’ and a surgeon as ‘Mr.’  So in the second half of the seventeenth century, Campden had its own resident surgeon.

The property he leased was an ‘inn called the sign of the Dragon’. Now which pub was this?

Two inns are known with dragon in the name, The Green Dragon and the George and Dragon. The former was in Lower High Street and the latter in High Street.  John Allen is not listed as an innkeeper of either in The Inns and Alehouses of Chipping Campden and Broad Campden by Celia Jones, but then one would not expect a professional surgeon to run an inn, but rather to employ someone to do so on his behalf. Or is this yet another building not previously recognised as once a pub?

The other properties leased at the same time are no help in locating it for they are ‘Ley Close abutting a street called Lasebourne and two little closes near a lane called Sheep Street’. One can only assume these properties were taken as an investment rather than as a business.

Perhaps the House History Group may one day find a clue?